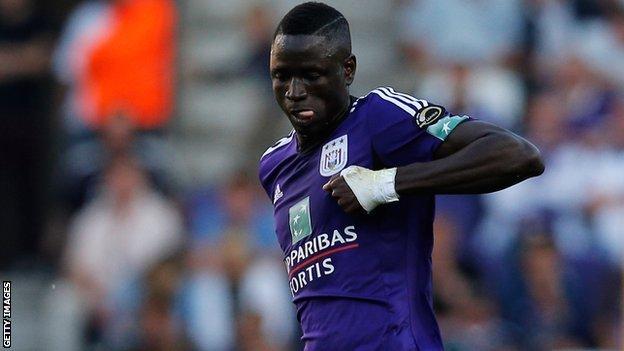 The 24-year-old joins from the Belgian champions Anderlecht on a four-year deal for an undisclosed fee.

"West Ham have given me the chance to play in the Premier League, I am very happy. To join such a club gives me great pleasure," he told West Ham TV.

Kouyate played for Senegal at the London 2012 Olympics, coming on as a substitute against Great Britain in the 1-1 draw at Old Trafford.

He has also won five full international caps and joins the Hammers off the back of a season where he played 44 matches for Anderlecht, including six Champions League appearances, and helped the club secure a third consecutive Belgian title.

Koutaye revealed he is eager to step up to a new challenge and follow in the footsteps of players he admires.

"I know a few players who were also at the club - Carlos Tevez, Demba Ba, Andy Carroll, who was obviously here last season. West Ham are a team who are known and ho are going to help me to progress," he said.

"For my part, I am going to try to do great things here and try to improve further still as a player.

"That I am here now is thanks to the manager, because he went out of his way, leaving his holiday for me, so he has done everything he could for me to join the club.

"He, my advisers and agents helped me make the right decision and said West Ham was the ideal club for me, because as a kid I dreamed of playing in the Premier League and now it is here that my dream has been realised."

Kouate's arrival follows that of Argentina striker Mauro Zarate, who joined on a three-year contract from Velez Sarsfield at the end of May.

"We hope to have at least four more signings in place by the time we kick-off against Tottenham on 16 August as we aim for at least a top-10 finish this season," he said.