Either Italy or Costa Rica can seal their Group D progress with victory when they meet in Recife, while a draw would officially end England's slim hopes of advancing to the last 16.

Meanwhile, France take on Switzerland with both sides knowing a win will put them in control of Group E.

Mark Lawrenson: "United States boss Jurgen Klinsmann told me a while ago that Costa Rica are a good side, and they showed it with their win over Uruguay.

"There were moments in their game against England where Italy looked uncomfortable, but they got the job done, and they will do that again here."

"Honduras tried to kick France out of the game in their opening match but, thankfully, it didn't work. Didier Deschamps's side won quite comfortably in the end but we did not learn much about them because of their opponents' lack of quality.

"Switzerland will offer more of a test of how good France actually are but, by the looks of things, Les Bleus are very strong in midfield."

"Honduras were poor against France and their tactics will probably be to just try to stop an energetic Ecuador side, who only lost to Switzerland in injury time. I can't see that working this time either." 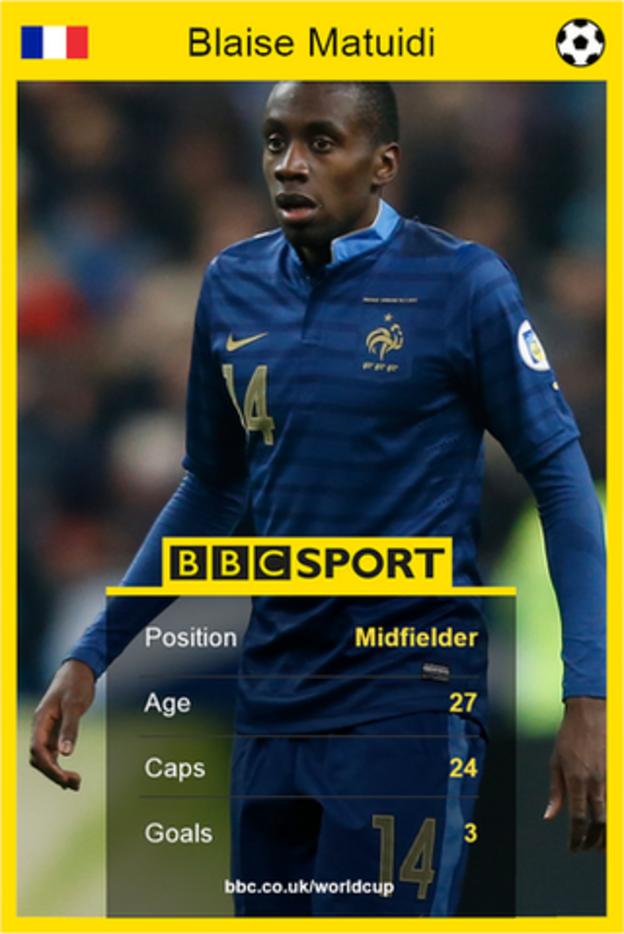 A pillar of consistency for Paris St-Germain as they claimed the French title in 2013-14, France's Blaise Matuidi has carried his club form into the international arena.

The 27-year-old had a pass completion rate of 92% during their campaign and 93% of his 87 passes in France's opening win over Honduras found the feet of a team-mate.

With Yohan Cabaye and Paul Pogba alongside Matuidi in midfield for Les Bleus, Deschamps can boast a trio who all cherish possession.

Deschamps describes Matuidi as a "first-name-on-the-team-sheet player" and, having been nicknamed 'marathon man' by team-mates, the former St Etienne player is recognised for his hard-working, combative style.

At a reported 7.5m Euros (£6m), PSG seem to have found a well-priced midfield dynamo. France will hope his consistency continues.

Xherdan Shaqiri is Switzerland's bundle of attacking energy but, in Patrice Evra, he faces a man eager to make amends on the international stage.

Evra, 33, was stripped of the French captaincy by Raymond Domenech at the 2010 Fifa World Cup for leading a players' strike, only to be reinstated by Deschamps.

Shaqiri is 11 years his junior and scored twice and created three goals as Switzerland went unbeaten in their World Cup qualifying campaign.

Their group may not have boasted stellar names, with Iceland finishing runners-up, but Shaqiri - largely peripheral at his club side Bayern Munich this season - is tricky and energetic.

Left-footed Shaqiri is given licence to roam infield from the right flank and that will present a conundrum for the 1998 World Cup winners, but he will need to show defensive discipline because Evra and Antoine Griezmann offer threat down the French left.

Italy's pass completion of 93% in their Group D opener against England is the highest recorded in a World Cup game (1966-2014).

The Italians have scored in their last 15 World Cup games, a record for them and the best current run of any side in the tournament.

The last three games between Switzerland and France have all been drawn, producing just two goals.

With his brace against Honduras, Karim Benzema became the first France player to score two goals in a World Cup game since Zinedine Zidane in the 1998 final.

Ricardo Rodriguez delivered two assists in Switzerland's opening game against Ecuador - and he provided more assists than any other defender in the 2013-14 German Bundesliga, setting up nine goals.

Ecuador head-coach Reinaldo Rueda was in charge of Honduras at the 2010 tournament, but his side failed to score and picked up just one point.

And Honduras head-coach Luis Fernando Suarez was in charge of Ecuador in 2006, where he took La Tri to the last 16, the country's best performance in the tournament.

Honduras coach Suarez was a national hero for Ecuador in 2006 when he guided them to the last 16 of the World Cup for the first time.

The former defender, now 54, saw his side earn two group wins, before being knocked out by a David Beckham free-kick as England beat them 1-0.

Suarez resigned after Ecuador failed to qualify for the 2010 World Cup, before returning to international management with Honduras.

The Arena Fonte Nova in Salvador - where France meet Switzerland - is so far the place to be for goals at the 2014 Fifa World Cup, with 10 arriving in the two matches it has so far staged.

Spain's crushing 5-1 defeat by Netherlands and Germany's 4-0 win over Portugal took place in the city, which is known as Brazil's capital of happiness because of the number of outdoor parties it stages.

However, with a tropical climate, partygoers could be running for cover in June - historically one of the wettest months of the year in the city.

African ancestry is a key part of its character. It is a rich and diverse city, but poverty and crime are also rife so in Salvador you are guaranteed to get a deeper insight into the contrasts that have formed modern-day Brazilian society.