If you enjoyed Lionel Messi's superb strike against Bosnia-Hercegovina in Argentina's opening game, then day 10 could be right up your street.

Messi and his team-mates face outsiders Iran, providing the Barcelona forward with the perfect opportunity to impress again on the biggest stage.

Here, Today at the World Cup tells you everything you need to know, from who is playing, who you can expect to win, which players to watch out for and how to ensure you do not miss any of the action.

Mark Lawrenson: "We saw in their opening game against Nigeria that Iran are extremely well organised under Carlos Queiroz. That won't be enough against Argentina, though.

"Argentina struggled to get going in the first half against Bosnia-Hercegovina but I would put that down to nerves.

"Messi was not having a good day at the office but, in the second half, he found a bit of a space and scored a wonder goal. Even when he is not playing well, he has the ability to do that, but Argentina need him to do it more often."

"Ghana's defeat by the United States means they have to win this - and an open game will suit Germany down to the ground.

"Germany's tricky-looking game against Portugal turned into a walk in the park for them, and it is definitely a case of them and one other to qualify for the last 16 now."

"Having picked Nigeria to get out of this group along with Argentina before the tournament, I now think Bosnia-Hercegovina will qualify.

"They were hard-working and dangerous against Argentina and had more about them going forward than Nigeria did against Iran." 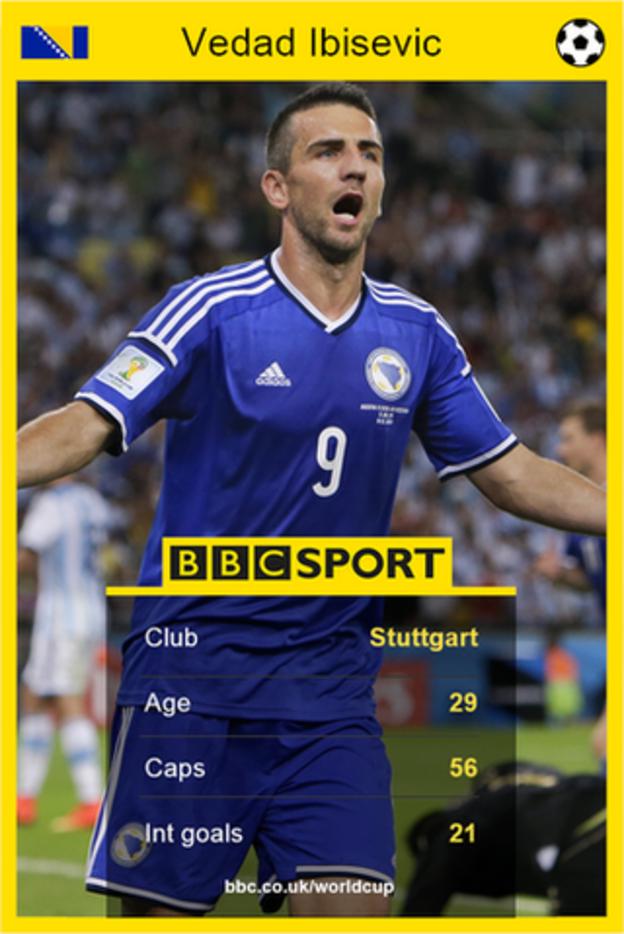 Vedad Ibisevic announced himself on the World Cup stage with Bosnia-Hercegovina's opening goal of the tournament in the defeat by Argentina.

The Stuttgart striker takes his motivation from his difficult upbringing - at one point during the war in his country in the 1990s he is said to have avoided capture by hiding with his sister in a hole dug by his mother.

Those early experiences drove him on to represent Bosnia at international level, though he has spent time playing in the United States and France in a varied career.

Ibisevic, 29, has been in prolific form for his country, with eight goals in 10 matches during World Cup qualifying - strikes which helped nudge Bosnia to top spot in Group G on goal difference. Indeed, Edin Dzeko and Robin van Persie were the only players to outscore him on the road to Brazil.

After being used as a substitute as coach Safet Susic opted for a one-man attack in an attempt to frustrate Messi and co on Sunday, Ibisevic is likely to start alongside Dzeko against Nigeria.

Germany's midfield had it all their own way against 10-man Portugal, and Ghana will look elimination in the eye if they allow such dominance in Fortaleza.

Toni Kroos, a player who can provide a killer final ball as well as consistency in possession, completed 88% of his passes against Portugal as his side dominated throughout.

If Ghana are to take anything from the game, the energy and experience of Sulley Muntari - in his third World Cup - will prove crucial in ensuring Kroos does not exert a telling influence.

Muntari, now at AC Milan, will likely line up alongside Andre Ayew and Mohammed Rabiu, and the trio will need to break up the work of Kroos, Sami Khedira and Philipp Lahm.

Germany so often overload the midfield region with forwards Mesut Ozil, Mario Gotze and Thomas Muller happy to drop deep, so if Muntari can win his battle with Kroos, the Black Stars will at least disrupt a vital cog in the German system.

Argentina have won 10 and lost just one of their past 13 World Cup group games (drawn two), scoring 26 and conceding just five in total.

Iran's win over USA in 1998 is their only win in 10 matches (drawn three, lost six) at the World Cup. They seem exposed in the air, with five of the past nine goals conceded scored with headers.

Nigeria have not won any of their past nine World Cup games (drawn three, lost six). Their last victory was a 1-0 win over Bulgaria in 1998.

No player was involved in more goals in the European section of World Cup qualifying than Bosnia-Hercegovina's Dzeko. He played a part in 14 goals, scoring 10 and assisting four.

Germany's Muller has scored eight goals in seven World Cup games, and seven in his past four.

Ghana look vulnerable at set-pieces and have conceded four of their past six World Cup goals from dead balls, including the late winner for the USA in their opener.

On this day at the 1998 World Cup in France, Iran beat the United States 2-1 in one of the most politically-charged matches in history.

The two countries had no diplomatic relations but the teams tried to diffuse some of the tension surrounding the game with a lavish exchange of gifts before kick-off.

The US were favourites going into the first-round match but goals from Hamid Esteli and Mehdi Mahdavikia put Iran ahead before Brian McBride pulled a goal back late on. The result eliminated the US and sparked wild celebrations in Tehran.

If the beach is your thing, then Fortaleza - which hosts Ghana v Germany - has plenty to offer.

On the north-east coast of Brazil, the state capital of Ceara boasts about 30km (20 miles) of sandy shores.

The city's Iracema beach - named after a character created by one of Brazilian literature's founding fathers, Jose de Alencar - is where the city's bohemians gather to drink and dance in bars and clubs until dawn.

Fortaleza is one of the best places for seafood in Brazil. But alongside its shrimp and crab dishes, it is also well-known for a crepe made with cassava flour, known as Tapioca. Fillings range from beef jerky and cheese to banana.