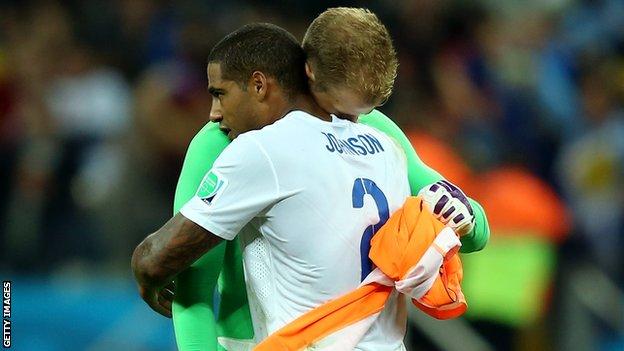 England are out of the Fifa World Cup thanks to Costa Rica's shock 1-0 defeat of Italy in Recife.

Roy Hodgson's side were beaten by Group D rivals Italy and Uruguay.

"Part of me thinks you shouldn't look back, but if you look at the players England had in 2006 - the so-called golden generation - they are so much better than today's team.

England needed Italy to win both of their remaining games to stand a chance of reaching the last 16, but Costa Rica's victory ended their involvement.

Former England defender Rio Ferdinand believes a lack of experience cost Hodgson's side, but thinks the tournament will be important for the development of their young players.

"Maybe England were a bit naive," he said. "In the game against Uruguay, for instance, when they got back to 1-1, they had a chance to get a point and everything would have been down to the final game.

"But the players can take experience from the tournament. It is valuable, not just playing minutes but being around the hotel, how you prepare yourself, what it means to go to a World Cup and feeling that pressure."

Hodgson had picked a squad with an emphasis on youth and was hopeful they would progress out of a tough group.

Costa Rica were supposed to be the weakest team in a pool containing three former World Cup winners, but the Central American side were the first to progress to the last 16.

Despite England's campaign starting with a 2-1 defeat by Italy, a promising performance gave them confidence for Thursday's game against Uruguay.

But Luis Suarez's brace gave Uruguay a 2-1 victory, which left Hodgson's men relying on other results.

In the aftermath of the defeat, Hodgson insisted he would not resign, while Football Association chairman Greg Dyke added Hodgson's job is not under threat.

"We are supportive of Roy," said Dyke. "I already see people asking the question, 'Will he stay?' The answer is 'yes'."

England goalkeeper Joe Hart said the players were "proud to play" for Hodgson.

"He is a great manager, a very passionate man and someone I have an awful lot of respect for and I hope to continue playing for him," Hart said.

Former England winger Chris Waddle cited a lack of quality coaching in the country as a reason for the national side's failure.

Waddle, part of the England side beaten on penalties by West Germany in the semi-finals of the 1990 World Cup, told BBC Radio 5 live: "The Premier League is different to any league the world and that is our big problem.

"It's frustrating, because we have everything we need - money, facilities - but it comes down to coaching, and we have to get something right about producing players.

"The Premier League is a great advert for our football but it does our national team no good whatsoever."

England finish their campaign against Costa Rica on Tuesday.