The final set of second-round group games could see the World Cup hopes of Cristiano Ronaldo and Portugal dashed.

Having been demolished by Germany, the Iberians know defeat by Group G rivals USA would end their involvement - and a draw would leave them with much to do in their final game.

Here, Today at the World Cup tells you everything you need to know, from who is playing, who you can expect to win, which players to watch out for and how to ensure you do not miss any of the action.

Mark Lawrenson: "I tipped both of these teams to win their opening games and I think they will both stay unbeaten for a bit longer.

"This game will give us the first indication of how good the Belgians might be, and they are a team that everybody is looking forward to watching."

Lawrenson: "This is the game that both these sides will see as winnable, but that might mean what could have been an open game will turn into a much tighter one.

"I think Algeria might edge it, but both teams will be heading home at the end of the group stage."

Lawrenson: "I am going to go for a shock and pick the United States to beat Portugal. Jurgen Klinsmann does not have the most talented squad at the tournament but they are greater than the sum of their parts.

"Portugal had a shocking start to their World Cup against Germany, and it will be down to Cristiano Ronaldo to save their tournament. I just don't think he is in the shape he needs to be to make a difference." 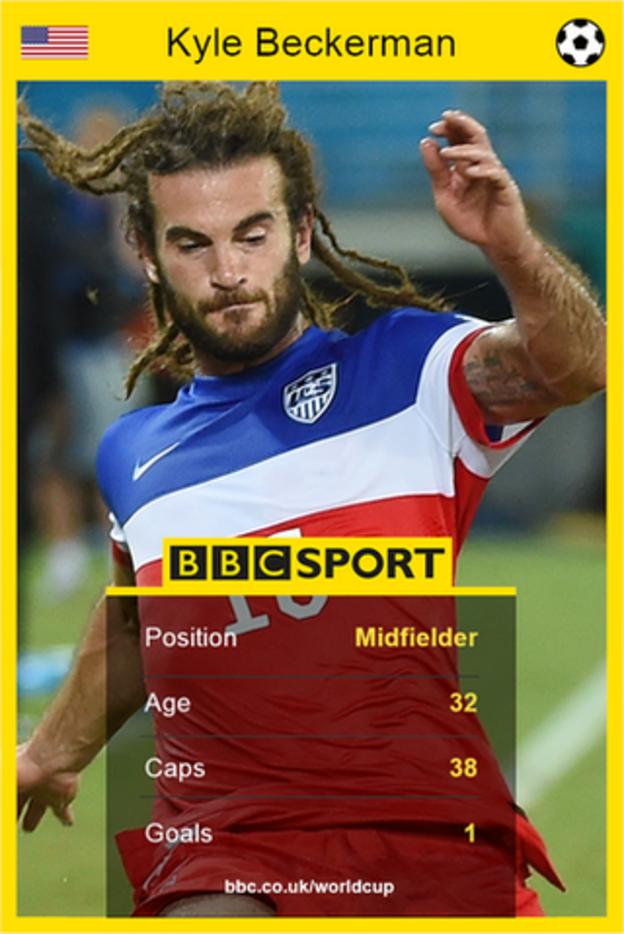 Of course, we all knew Real Salt Lake's Kyle Beckerman would be one to watch at the World Cup, didn't we? OK, maybe not.

The dreadlocked holding midfielder was exceptional for USA in the opening Group G win against Ghana.

The Maryland-born 32-year-old, who has been a regular in Klinsmann's teams since 2011, covered 11,486 metres during the 2-1 victory, only bettered by one other player on the pitch.

He spent most of the game trying to keep the likes of Andre Ayew and Kwadwo Asamoah at bay, while helping his defenders nullify the threat of Asamoah Gyan.

Beckerman is aware he might be faced with one of the toughest tests of his football career in the humidity of Manaus.

"We're going to have to know exactly where Ronaldo is at all times while we're attacking, that's when he can be most dangerous because lose the ball and next thing you know it's in the back of your net," he said.

Russia will find it difficult to keep Belgium attacking midfielder Eden Hazard quiet, but one player who could be up for the task is Andrey Eshchenko.

Fifa's heat map from the 1-1 draw against South Korea showed the Anzhi Makhachkala defender covered 10,885m, largely in the area Hazard will try to exploit on Sunday.

Eshchenko also got forward to help his side equalise, so Chelsea's Hazard will have to remember his defensive duties.

The diminutive Belgian was not at his best in the 2-1 win against Algeria, but he does possess quick feet, trickery and scored 10 goals last season for Chelsea.

USA have kept only one clean sheet in their past nine World Cup games.

Belgium's victory over Algeria was the first time they have won a match in which they conceded first in more than four years.

Russia striker Oleg Salenko made history against Cameroon in the 1994 World Cup in the United States by becoming the first - and, to date, only - player to score five goals in a World Cup match.

Salenko went on to claim the Golden Boot with six goals alongside Bulgaria's Hristo Stoichkov, becoming the only player to do so from a team eliminated in the first round.

This is Russia's third appearance at the finals since the break-up of the Soviet Union, and they have previously failed to qualify for the knockout stages.

Located in the south-east corner of Brazil, it was originally a Spanish territory conquered by the Portuguese. Porto Alegre's growth began when couples were encouraged to leave their homes in the Azores to boost the city's population.

Over the years, it has also welcomed many European immigrants.

Even though it has its share of urban problems, the city is considered one of Brazil's best regional capitals to live in.

It is also where you will find true winter: the temperature can drop to -3C (27F) in June. The teams might need to wear their thermals for the 20:00 BST kick-off.