It is set to be a manic Monday, with hosts Brazil, Mexico and Croatia all vying for a last-16 berth in the final round of Group A matches.

Luiz Felipe Scolari's Brazil should be safe, needing just a draw to go through against eliminated Cameroon. They will finish top with a victory - unless Mexico win their match by two more goals than the Brazilians do.

They have four points, as do Mexico, who are involved in the tastier-looking contest against Croatia out in Recife.

A win for Croatia will see them through; a draw and Mexico are definitely into the next phase - with the European side joining them in the knockout round if Brazil lose.

It is also the final chapter in the Group B saga - the Netherlands and Chile have a 100% record and are already through. They both fight it out in Sao Paulo, with Chile needing to beat the Dutch to finish top and probably avoid a second-round meeting with Brazil.

In the other match, Australia who were valiant against both qualifiers face plucky minnows... Spain for the wooden spoon.

Below, Today at the World Cup tells you everything you need to know, from who is playing and who you can expect to win, to which players to watch out for and how to ensure you do not miss any of the action.

Mark Lawrenson: "Brazil should win and top the group but they have been OK at best so far. I was at their last group game and they struggled to break down Mexico - I just think they move the ball too slowly. You can also get at them when they don't have the ball."

Lawrenson: "I am going to go for Mexico to get the point they need because I was impressed by them against Brazil. They play with three centre-backs but Rafael Marquez comes out from the back and the wing-backs bomb on. Oribe Peralta looked a decent player as well up front."

Lawrenson: "This is the end of an era for Spain after an absolutely fantastic run so I think they will raise themselves against a spirited but limited Australia side, who were a bit unlucky not to get anything from their game with the Netherlands."

Lawrenson: "The Dutch have gone from strength to strength, and scored a lot of goals, since almost going 2-0 down to Spain in the first half of their first game. But Chile have been very strong too and their high tempo in-your-face football will cause everybody problems at this World Cup." 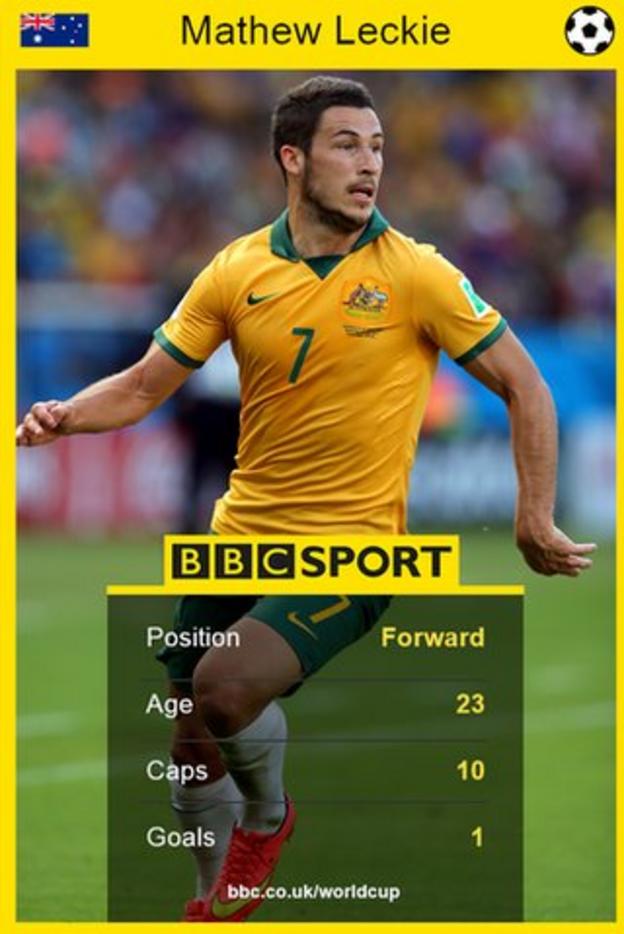 Australia will be going home soon, but do not be entirely surprised if they do so on the back of a shock win over the world champions - albeit the soon to be dethroned world champions.

Their performances against Chile and Netherlands were excellent even in defeat, and one player who caught the eye was 23-year-old Mathew Leckie.

Since 2011, the Melbourne-born forward has been developing his career in Germany, and recently signed for Bundesliga 2 side FC Ingolstadt for £600,000. His value will surely rise after this World Cup.

Made from the same stock as his robust and gutsy compatriot Tim Cahill, Leckie is looking to get to the top in football.

"I took the hard road and I'm here today - it was a lot of hard work," said the former Aussie Rules player.

"You could say that I made the right choice. I'm part of the national team now and hopefully I can be for many years to come.

"I'm playing in Germany, which is also nice, and I've definitely got ambitions to become successful and get higher than I am now.''

How do you stop a man like Mario? Suspended for the first game, he then scores twice on his return; imperious in the air and a great target-man. Mandzukic is hungry.

But how will he fare against a Mexico side yet to concede a goal? The North Americans are not as flimsy as they have been in the past, and at the heart of their defence is veteran Rafael Marquez.

The 35-year-old is the first person to skipper a World Cup team at four tournaments and has the experience of having won two Champions League trophies with Barcelona. He was recalled to the national side for the play-off win over New Zealand, after a 15-month absence.

His goalkeeper Guillermo Ochoa was the star of the show in the goalless draw against Brazil, but Marquez also impressed in keeping ineffective striker Fred and his replacement Jo quiet.

Mandzukic will be arguably his toughest opponent. It is worth watching the highlights video again to see how he used his body strength to get in front of his marker to set up the first goal for Ivica Olic in the 4-0 rout of Cameroon. But surely Marquez would not allow the Bayern Munich striker the sort of space he was afforded for the third goal.

Croatia have won two of the three matches they have played against Mexico.

This will be only the second meeting between the Netherlands and Chile. The Dutch won the last meeting by the drawing of lots after their match at the 1928 Olympic tournament finished 2-2.

In his 126 minutes of World Cup action so far, Spain striker Diego Costa has failed to muster a single shot on target.

Brazil won their only previous fixture against Cameroon at a Fifa World Cup - 3-0 in San Francisco during the group stages of the 1994 tournament.

Midfielder Tim Cahill has scored five of Australia's 11 World Cup goals but is suspended for the final game.

Cameroon have had 30 shots in this World Cup but only three have been on target.

Croatia memorably finished third on their World Cup debut in France 1998, with striker Davor Suker scoring in each of the knockout games to finish as the tournament's top scorer with five goals.

They started their World Cup adventure with victories against Jamaica and Japan before losing to Argentina 1-0 with qualification already assured. In the last 16 Croatia saw off Romania before enjoying a stunning 3-0 win over Germany to reach the semi-final.

Eventual winners France ended their run but the likes of Suker, Igor Stimac, Slaven Bilic, Robert Prosinecki and Zvonimir Boban left the tournament with many admirers.

If visiting Recife in June, you'll find yourself in the middle of the Sao Joao (Saint John) festival, popular in many parts of Brazil, and rivalled only by carnival in this city.

Here, the festival has a very special flavour. There are delicacies made from corn and peanuts, eaten to the sound of forro - a traditional folk music.

Recife's caldo de sururu - a soup made with small clams - is one of the city's most famous foods. It is served in bars as a snack, to accompany a cold beer.