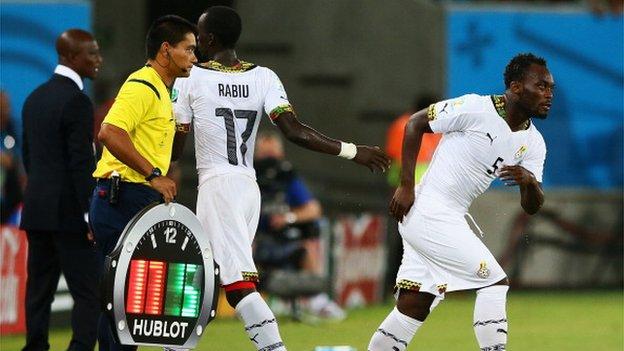 Ghana midfielder Michael Essien has returned to full training to boost his side before Saturday's World Cup Group G match against Germany.

The 31-year-old suffered a toe injury in the 2-1 defeat by United States in their opening match on Monday and was forced to rest on Wednesday.

However, the ex-Chelsea man played a full part in Thursday's drills.

Essien is likely to be in the starting line-up to face Germany, having been a substitute against United States.

Coach Kwesi Appiah was criticised for leaving out Essien and Kevin-Prince Boateng from his first starting XI, although both players were brought on in the second half.

However, the pair were unable to prevent Ghana falling to an 86th minute winner by John Brooks that leaves the Africans needing to get something from their meeting with Germany.

If Ghana suffer a second defeat and United States beat Portugal in the group's other game, the Black Stars will be out of the tournament.

Appiah said: "It's not going to be easy to qualify from the group, but we'll give everything to do just that.

"We're going to have to play well against Germany and I know we'll give them a good game."