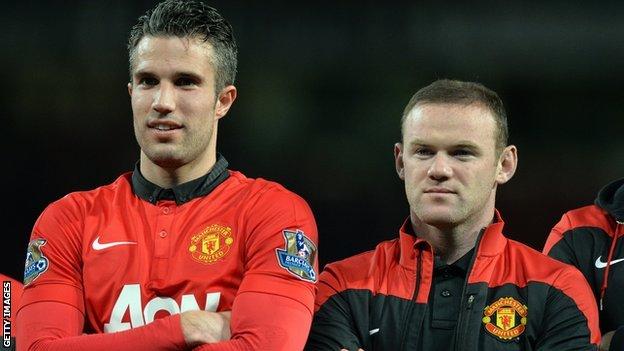 Rooney, 28, scored in England's 2-1 defeat to Uruguay but his performances have been questioned by football pundits and former England players.

"I don't think you can blame him for scoring a goal, working his socks off and missing three chances by inches," said Dutch striker Van Persie.

"Wayne is a great player and part of why I came to Manchester United."

Rooney's strike against Uruguay - his first in 10 World Cup appearances - came fewer than 24 hours before England's elimination from the tournament was confirmed by Costa Rica's shock 1-0 win over Italy.

The former Everton striker now has 40 international goals, but former United team-mate Paul Scholes said before the tournament in Brazil that Rooney may be past his best.

Rooney's role within the England team has also been questioned, with manager Roy Hodgson employing him in a wide role during the 2-1 loss to Italy before reverting him to a more central position against Uruguay.

"If you look at his performances, the things I've seen and heard were very good," said Van Persie. "He played as a left winger, gave the assist for the 1-1 against Italy and played well as far as I know."

The Netherlands have already booked their place in the last 16 after beating champions Spain 5-1 and then Australia 3-2.