Which is the only team from Groups C and D with no chance of progressing to the second round?

Yes, you guessed right. But while Roy Hodgson's England will have packed all but their kits ahead of their final Group D match against Costa Rica, there are seven other teams waiting to discover their World Cup fates on Tuesday.

Mark Lawrenson: "United States boss Jurgen Klinsmann has been saying for a while now that Costa Rica are a good side, and they have shown it in Brazil. They are fast and strong and have been the best team in the group so far.

"I tipped England to go through but they have fallen well short and I have a feeling their World Cup will end with another defeat. I am glad people have not torn into them for failing because this tournament is the starting point for that team, not the end."

Lawrenson: "This is essentially a play-off for a place in the last 16, although a draw will put Italy through on goal difference.

"I wonder how much Uruguay's efforts against England will have taken out of them. Although, having said that, Italy were given the run-around by Costa Rica.

"I see goals in this game, but ultimately Italy will just sneak through."

Lawrenson: "Ivory Coast carry a goal threat and, in the last half-hour of their defeat by Colombia, with Didier Drogba and Salomon Kalou on with Yaya Toure, they could easily have nicked a draw.

"Greece know a win could put them through but they have not been great and, as soon as they go a goal down, it could be game over."

Lawrenson: "I was at Colombia's win over Ivory Coast in Brasilia and they are another of the teams to have impressed me. Most of their fans seem to be in my hotel, and they kept me awake all night celebrating that victory.

"James Rodriguez is a livewire going forward and I like the look of Mario Yepes at the back too.

"Japan need to win to have any chance of progressing but I cannot see that happening. I did not think much of them in their first two group games, especially up front, where they don't look like they have got enough quality." 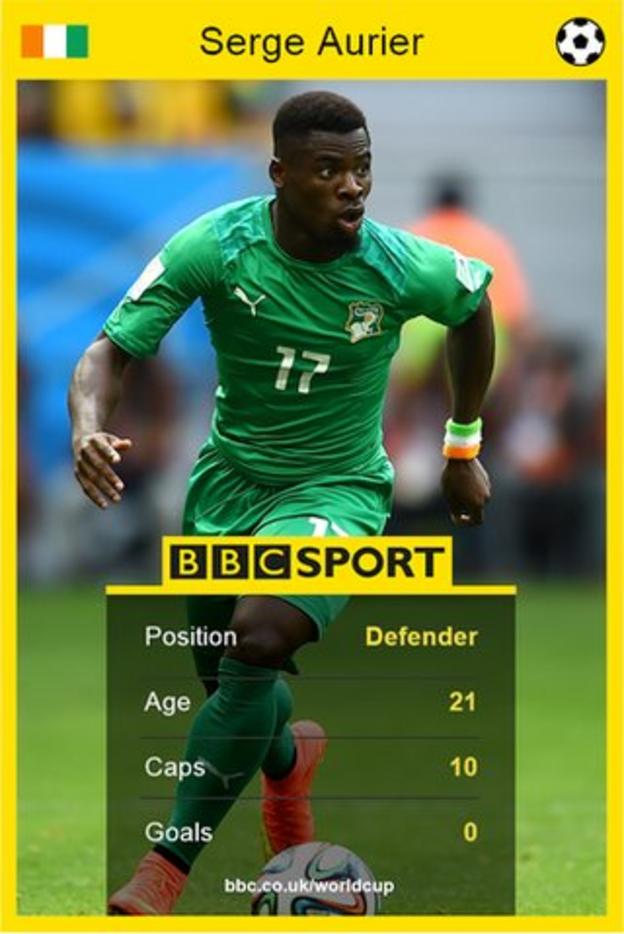 He is only 21, has been linked with a move to Arsenal and compatriot Didier Drogba believes he can thrive in the Premier League.

Serge Aurier has been one of the shining lights in Ivory Coast's mixed bag of a campaign to date.

The Toulouse right-back provided two crosses converted by forwards Wilfried Bony and Gervinho in the 2-1 win over Japan.

In their next match against Colombia, Aurier's energy levels did not drop. In both games, the distance he covered was well above the average distance covered by the team.

It will not be a surprise if he gets among the goals against Greece, having scored six times for the French Ligue 1 side last season.

Ivory Coast veteran Drogba said after the game against Japan: "Serge brought us energy and balance and he had a fantastic game.

"He's the best right-back in all of France. I think he'll do well at the next level too, in the Premier League."

If Japan are going to stand a chance of qualifying then they will have to beat Colombia. To do that, one man who needs to find his mojo is forward Shinji Okazaki.

The 28-year-old has scored 38 goals for his country, but has yet to find the back of the net for Alberto Zaccheroni's side in Brazil.

He has also not had a shot on goal, which is a worry. But what was not a concern was his form going into the tournament - scoring 14 times for Mainz last season to leap ahead of Shinji Kagawa as the Japanese player with the most goals in one Bundesliga season.

According to the Fifa heat map, Okazaki played on the right against Ivory Coast and moved inside, while against Greece he played as a target man.

He does not possess rapid pace, but the forward's positional sense is excellent, so veteran Mario Yepes will have to call upon his experience to keep his opponent quiet.

The 38-year-old, who made his international debut in 1999, was a rock in the 2-1 win against Ivory Coast - his 100th appearance for Colombia.

He is the oldest outfield player in the tournament, but coming up against younger players has not concerned him. Against Greece, he coped with the physical presence of Georgios Samaras, and then did well in marshalling Ivory Coast striker Wilfried Bony, who was later substituted.

His experience is worth its weight in gold, but his advancing years mean that he might not be as sharp as he used to be, as demonstrated when his mistake almost allowed Drogba to score for the Ivorians.

Eight of Ivory Coast's 12 goals at the World Cup have been scored after the 60th minute of games.

Colombia won their only game against an Asian team at a World Cup (2-0 v United Arab Emirates in 1990).

Costa Rica have scored in each of their seven previous World Cup meetings with teams from Europe.

Roy Hodgson has lost his last four games at the World Cup, two with Switzerland and two with England.

Costa Rica's best achievement to date came on their World Cup debut in 1990 when they reached the last 16 unexpectedly. Coached by Serb Bora Milutinovic, they beat Scotland 1-0 in their opening match, before losing narrowly to Brazil and then beating Sweden 2-1 to qualify. They were eventually knocked out by Czechoslovakia.

The Caipirinha, made with cachaca (sugar-cane brandy), sugar and lime, is Brazil's national cocktail.

There are a number of variations, such as caipiroska, made with vodka instead of cachaca. It's also possible to vary the "roska" part of the drink, based on your fruit of choice. In Natal, where Italy play Uruguay, there's also the local "cajaroska" - a taste only found in the north east.

The area is also famous for its lace and embroidery, including curtains, towels and clothes.