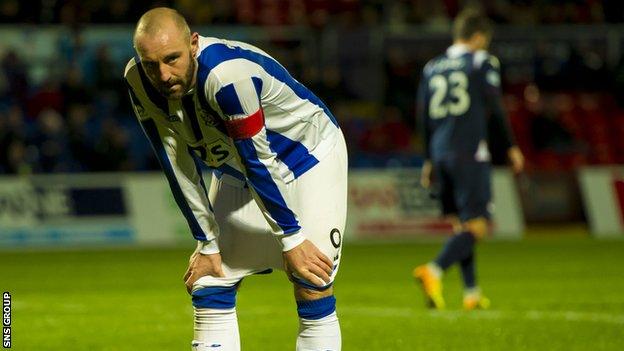 "We'll be doing everything we possibly can to keep Kris Boyd because a striker that gets you 20 goals a season is worth his weight in gold.

"I've spoken to him, so has [manager] Allan [Johnston], and hopefully we've done enough to convince him that his future lies at Rugby Park."

Boyd, 30, scored 22 goals for Killie in the last campaign but is out of contract and has had talks with Premiership rivals Aberdeen.

The Scotland striker began his career with the Ayrshire side, leaving for Rangers in 2006.

And he returned to Kilmarnock in February 2013 after spells at Middlesbrough, Nottingham Forest, Eskisehirspor and Portland Timbers.

David Goodwillie is another forward Locke is keen on working with next season, now the 25-year-old has been released by Blackburn.

"It's going to be difficult, because I'd imagine they'd have a lot of options," he said of both players.

"But it's up to myself and Allan to do our best to sell the club to them and if we can get the right players in we are confident we can do well."

Goodwillie, capped three times by Scotland, struggled to make an impact at Ewood Park after his £2.8m move from Dundee United in 2011 and spent last term on loan at Tannadice and with Blackpool.

"His career has stalled a bit but I think he's a fantastic footballer," explained Locke. "You see it with Kris Boyd coming back to Kilmarnock. People were writing him off and look at the season he had.

"Hopefully, David could do the same. But he's not a Kilmarnock player. We are trying hard behind the scenes to get him and a number of other players."

Former Hearts boss Locke played for Kilmarnock from 2002 until 2009 and is a long-time friend of Johnston, the pair having been team-mates at Tynecastle and Rugby Park.

"I've known Allan since we were 16, we are very close and I think it's important for any backroom team to have people that you trust," he said.

"I know Kilmarnock is a fantastic club, so it was an easy decision."