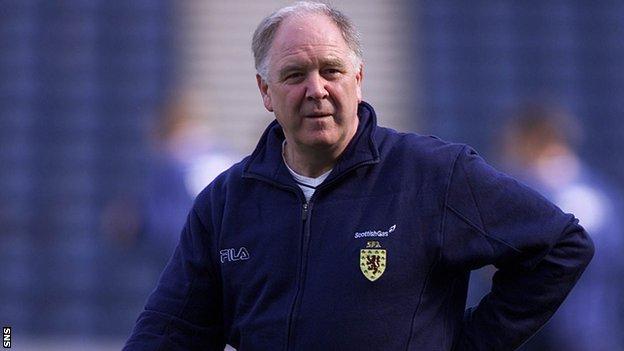 It was always a mistake to underestimate Craig Brown.

When he was appointed Scotland manager in 1993, some fans and members of the media griped that a more high-profile figure should have been chosen as successor to Andy Roxburgh.

Continuity was enabled by the decision, since Brown had been the assistant manager, but he ensured that it was eventually recognised that convenience alone was not the determining factor. Any instinct to write off the new manager was subdued by his record, since he guided Scotland to Euro 96 in England and the France 98 World Cup.

Brown became the longest-serving national team manager, and the longevity was in itself an achievement. He had previously served an eight-year spell as assistant manager, which he combined with leading the Scotland youth and Under-21 sides.

His background was a sound basis for the job, but the tendency was initially to complain that individuals such as Graeme Souness and Gordon Strachan had been overlooked. Brown consistently defied the assumptions made about him, though.

He is an avuncular and engaging individual, often accommodating to the media and supporters, but the easy-going nature was not always deployed. Brown, like Roxburgh, was a stickler for certain standards and a level of discipline in the national squad.

Players will always rail against restrictions, and some were frustrated by what they considered an officious approach, but the attempt was being made to influence their character and professionalism.

Brown was adamant that general standards had to be maintained. He insisted, for instance, that players did not wear tracksuit bottoms or cycling shorts at training.

He once sent Duncan Ferguson home from an Under-21 squad because the striker turned up for training wearing cycling shorts beneath his kit. The player later apologised, but Brown also received a phone call from Ferguson's Dundee United team-mate, Paul Sturrock, saying that the young player needed that exact form of stern authority to aid his development.

The rule was based on Brown's belief that if a player needed to wear the cycling shorts then it was a signal that he was suffering from a muscle complaint that needed attention, but Brown was also strict on players not wrapping tape around their socks. He also insisted that his players wait until the opposition were back out before they returned to the field after half-time, because that's what Bill Shankly did at Liverpool.

Richard Gough withdrew from national service under Roxburgh, following Scotland's 5-0 defeat in Portugal in 1993, but Brown resisted persistent calls to select the Rangers defender when he took over as manager three months later. Gough and Roxburgh had suffered a clash of personalities as much as anything, but Brown's refusal to bend was an indication of his self-belief and confidence in his decision making. It was an act of conviction.

"Sometimes as the number two you learn more, or you hear more and players confide in you because you're not the manager," Brown said. "I watched and listened to what happened with Richard Gough, who I've got to say was an outstanding player, and I didn't pick him because I thought, 'this is going to be good for the team spirit'.

"I may have been wrong, and I'm not saying I'm always right. [But] never once did the Rangers manager or chairman complain about me not picking Richard Gough. If my argument had been weak, they would have slaughtered me.

"At the beginning, it was [the biggest dilemma he faced], but I didn't bat an eyelid. I said, 'I'm going to do this job the way that I want to do it. If it doesn't include Richard Gough, we lose a few games and the press say he should be in, then that's it. I would rather do what I thought was right rather than pander to the media or to the club'."

Brown was a straightforward presence, and he understood that working in conjunction with the journalists who cover the national team was worthwhile. Even so, he was not so readily welcoming of all aspects of the media.

There were occasional front-page stories about Brown's private life, although he still refutes insinuations that were made, in particular that he favoured Rangers players or that his personal relationships were complicated.

"I had successful litigation against the News of the World," Brown said. "There was one [newspaper] front page [with] 11 factual inaccuracies in it."

There were plenty of football dramas to deal with. Ahead of Euro 96, Brown had to inform Jim Leighton that the first-choice goalkeeper would be his rival Andy Goram; ahead of France 98, Goram withdrew from the squad just before the tournament to deal with personal issues back home.

Like his predecessors, Brown encountered a deep sense of frustration in the finals of major tournaments. In England in 1996, a 0-0 draw with Holland was followed by a game against the hosts, with Gary McAllister missing an opportunity to equalise from the penalty spot. Paul Gascoigne then put England 2-0, but only because his manager Terry Venables didn't have enough time to substitute the player before he scored.

At France 98, Scotland were drawn in the same group as the reigning champions, Brazil, and played them in the tournament's opening game. As well as coming up with the idea that the players would wear kilts instead of a suit before the game, Brown also tried a spot of psychology as the teams waited in the tunnel ahead of kick off.

"I turned - you're trying to do everything to get the boys confident - and said, I've just seen Brazil guys and they're ******* themselves, they're holding hands," Brown recalled.

"Where did I get the idea [for the kilts]? From a youth coach at Bayern Munich. Their youth team go in the Bavarian national costume of Munich to away games."

As with Euro 96, though, the tournament ended at the first hurdle, as Scotland failed to qualify from their group. A 3-0 defeat by Morocco ensured that Brown endured what he still describes as his worst evening as Scotland manager.

"But you've got to put it in proper context," he said. "Morocco were the African champions, [the country] has 35m people, seven times the size of Scotland, they're football mad.

"The result looks terrible and the Daily Record had shocking pictures, the three goals on one page and our hotel, the loungers, the food, the players lying by the side of the pool - which they're entitled to do - photographs of the lavish facility in three big photos. 'We gave them this and they gave us that'. Good journalism, I suppose."

Brown led Scotland for one more qualifying campaign, but failed to guide the team to Euro 2000 and accepted that his time in the job was up. There were plenty of memorable moments, but even during the lowest times there could be no shaking from Brown the sense that he was doing something that he cherished.

"When I went to France with the World Cup squad, we had a player playing in France, John Collins," Brown said. "I said to him, 'I'm going to get interviewed, give me some French so that they'll think I'm smart'. He gave me a wee phrase I used a few times with the journalists in France: victoire ou defaite, l'important, c'est le fun.

"'Victory or defeat, the important thing is the fun'. I've been the luckiest guy on the planet, because I've had a wonderful time, great fun, working in football."