The 36-year-old rescued a 2-2 draw against Ghana with his first touch.

"I'm awfully happy for Klose - he was on the pitch for two minutes and scored," said Low. "He's had a difficult season, he has been injured. 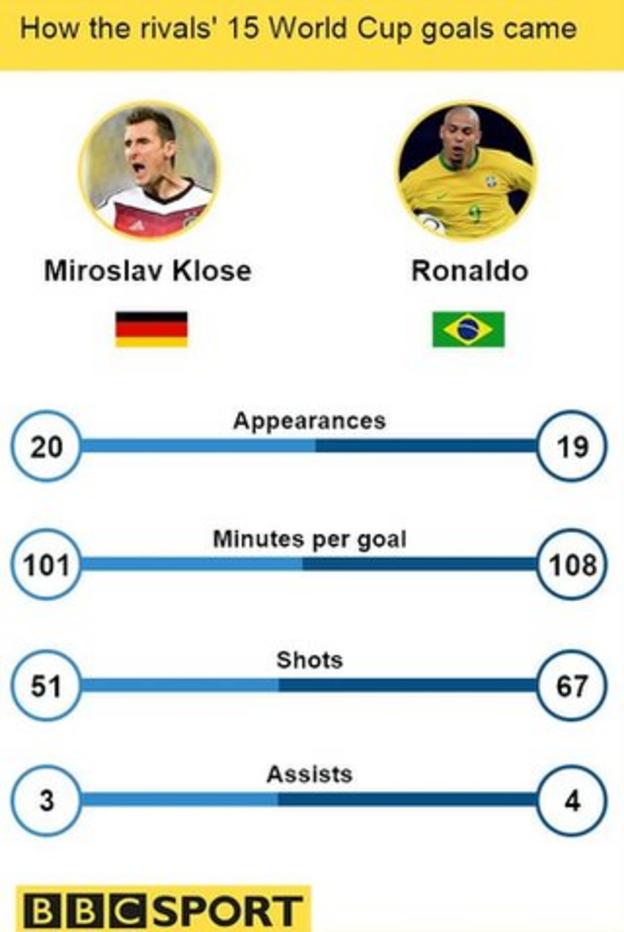 "But it's sensational for me to have this kind of player on the bench knowing they can make a decisive move."

Lazio striker Klose, who returned from a hamstring injury last month, only netted seven times for the Serie A side last season, but continued his knack of scoring decisive World Cup goals for his country.

He was introduced by Low as a 69th-minute substitute, and slid in Germany's equaliser against their Group G rivals moments later.

The goal moved him level with former Brazil striker Ronaldo as joint record scorer in the World Cup finals, and also saw him become the third player to score at four World Cups after fellow German Uwe Seeler and Brazil great Pele.

"Welcome to the club Klose," tweeted Ronaldo. "I can imagine how happy you are. What a nice World Cup!"

Klose, who made his international debut in March 2001, is Germany's record goalscorer with 70 goals, none of which have come in a defeat.

He passed Gerd Muller's mark of 68 earlier this month, and his equaliser against Ghana took him past the West Germany legend's landmark of 14 World Cup goals.

Team-mate Per Mertesacker said the veteran striker, who also scored at the 2002, 2006 and 2010 tournaments, showed he is still capable of changing games at the highest level.

"What a record and what a player. I've been playing with him for 10 years and that's the player we need," the Arsenal defender told BBC Sport.

"Today he made the difference when he came off the bench and just showed how good he still is."

Klose's landmark goal came as Germany came from 2-1 down to hold Ghana, and they may still need a point in their final group game against USA.

Mertesacker, who won his 100th cap, added: "That was a really tough fight today. It deserved to be my 100th game. I'm proud of that number of games.

"It could have been worse today. We expected them to perform physically. The way we came back was magnificent. We are proud of that performance even if it's just a draw.

"We are a good team and we showed that today. In a special way our comeback was good. We still got a draw so we're still in a good position. Our confidence is still high."

Asamoah Gyan joined Roger Milla as the joint-highest scoring African player at a World Cup with his fifth goal.

The draw means 2010 quarter-finalists Ghana must beat Portugal in Thursday's final group match to stand any chance of reaching the knockout stage.

"We were tactically perfect, we had to work hard because Germany are so good in possession. We didn't want to run around and waste energy.

"Now we have to go all out against Portugal in our last game. We have to focus and believe we can beat Portugal."