When the moment came, Miroslav Klose was ready.

One outstretched right boot and one simple tap-in was all it took to score a goal that sealed his place in the World Cup annals.

The goal was typical of Klose - it wasn't spectacular; but it was instinctive and, above all, important. 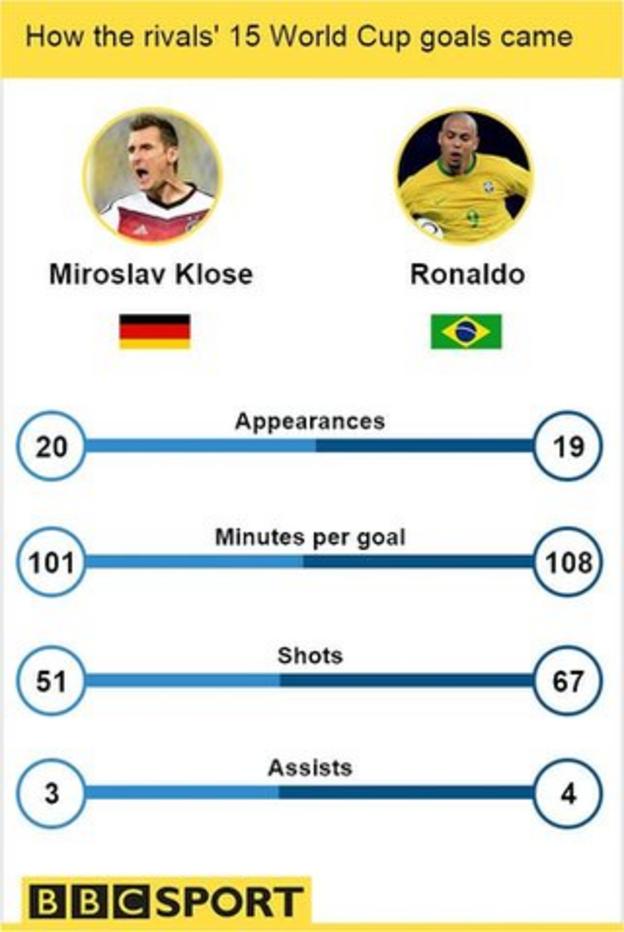 It arrived with Germany trailing Ghana 2-1 and only 19 minutes left to play in a pulsating Group G match.

Benedikt Howedes's header might have been going in; it might have struck the post. Klose wasn't going to take the chance. The 36-year-old had only been on the field for 112 seconds and had not yet touched the ball. But his instincts were sharp, and his anticipation took him beyond the defence to prod in from a yard.

As he turned away to celebrate, arms outstretched, it might have taken a moment for the significance of the goal to sink in. Those who know him say the team always comes first, but a record-equalling 15th goal in World Cup finals had been on his radar.

That the goal came against Ghana was a neat piece of symmetry because Ronaldo - the Brazil legend whose record the German has matched - had scored his last World Cup goal against the same opponents in 2006.

Ronaldo has been all too aware of the possibility of losing his record.

He spoke at a fans' festival in Fortaleza only last week, and his message to the Brazilian fans was clear. "I have one big favour to ask of you," he said. "Please cast a tiny spell on Miroslav Klose. That would be good, so that Klose scores no goals."

Whether or not his record is surpassed, Ronaldo will always be considered one of the greats of the modern game. Klose, despite this accomplishment, will not.

And yet the Lazio striker is breaking records that great players of the game have set. He joins Brazil legend Pele and fellow Germany forward Uwe Seeler as the third man to score at four World Cups. He has surpassed the great Gerd Muller as Germany's leading scorer with 70 goals. And significantly, Germany have never lost when he has found the net.

"I am so happy for Miroslav for drawing level with Ronaldo," Joachim Low, the Germany manager, said. "He was only on the pitch for two minutes when he scored. It is sensational for his career. He's had a difficult season and been injured a few times but it was a great moment for him, for the team and for me."

And Low added: "His secret is his incredible professionalism; his strength is his will."

The brilliance of his international record also draws attention to the anomaly of his much more ordinary club career, which has produced 206 goals from 524 matches.

He failed to spark at Bayern Munich between 2007 and 2011, having impressed at Werder Bremen over three seasons prior to that.

And more recently at Lazio he has, once again, scored goals without ever threatening to set Serie A on fire. This is a man who has played out his career in the shadows, who has let others take the limelight - and yet he now finds himself as the joint-holder of a great landmark.

Arsenal centre-half Per Mertesacker, who has played alongside Klose for many of his 133 caps, said: "I've been playing with him for 10 years. He made the difference when he came off the bench against Ghana and showed how good he still is.

"What a record and what a player."

Born in Poland, Klose arrived in Kusel, Germany with his family in 1986 reportedly knowing only two German expressions - "yes" and "thank you".

His parents had fled communist rule in Poland and spent nine days living with five other families in a single room of a refugee camp in Lower Saxony before being given passports. Football offered the young Klose a way of fitting in.

It has continued to win him friends.

Robert Peters, from the German newspaper Rheinische Post, told BBC Sport: "Miroslav is a legend. Not quite up there with the likes of Franz Beckenbauer, Lothar Matthaus, Gerd Muller or Jurgen Klinsmann, but very popular.

"He is a polite, humble and professional man who lives a clean life with no controversy and a good family around him. He takes care in what he eats, looks after his body and has never suffered from any major injuries."

Friends have described him as "modest, understated and incredibly honest and fair". In his Werder Bremen days, he once told the referee he had made a mistake when awarding the striker a penalty. In 2012, he scored for Lazio with his hand. He told the referee and the goal was disallowed. The referee shook Klose's hand, and didn't book him.

If "unassuming" is the positive take, defenders he has faced have sometimes had a less kind word for him, describing him as "anonymous", the last player they worry about before the game.

But at least one fellow striker is distinctly worried about him. If Ronaldo was concerned before the tournament, he must surely now fear that Klose - a man who has made the utmost of every opportunity extended to him - will find the net once more to take the record for himself.