Iran in the knockout stages of the World Cup? It could happen.

Despite showing great resistance against Argentina in their second Group F match, they were beaten by a wonderful Lionel Messi strike in injury time. But if they defeat Bosnia-Hercegovina on Wednesday and Nigeria lose to Argentina, a last-16 place is possible - although goal difference will be a factor.

A point, meanwhile, is all the South American two-time champions need to finish top of the group.

In Group E, free-scoring France have all but sealed qualification and top spot - they would have to lose heavily to Ecuador, and the Swiss record a huge win over Honduras. Ecuador are in second spot on goal difference only. It promises to be a cracking conclusion to the group stage.

Here, Today at the World Cup tells you everything you need to know, from who is playing and who you can expect to win, to which players to watch out for and how to ensure you do not miss any of the action.

Mark Lawrenson: "Iran are the team to have parked the bus in Brazil, although they were a bit unlucky to lose to Argentina in their second group game.

"Generally, coach Carlos Queiroz is more concerned about making sure they are extremely difficult to beat, which they have been.

"Bosnia-Hercegovina are already out but I don't think they will go quietly and if they create enough chances for Edin Dzeko, eventually he will take one."

Lawrenson: "Argentina are already through, and Nigeria only need a draw to join them. I think they will get it too.

"They will get chances against Argentina, just like Iran did. There is more to come from Argentina but, at the moment, the little genius Lionel Messi is getting them through the games."

Lawrenson: "I am not sure France are the real deal despite the number of goals they have scored, but it is going to take a good team to beat them.

"They are very combative and competitive in midfield, have different options up front and have a very thoughtful manager in Didier Deschamps."

Lawrenson: "A win will not definitely put Switzerland through, but I think they will make the last 16 because France will beat Ecuador.

"The Swiss have got a bit of firepower, and that should see off a Honduras side that have never looked capable of getting out of their group. They are quite entertaining to watch, though, because they just try to kick teams from pillar to post." 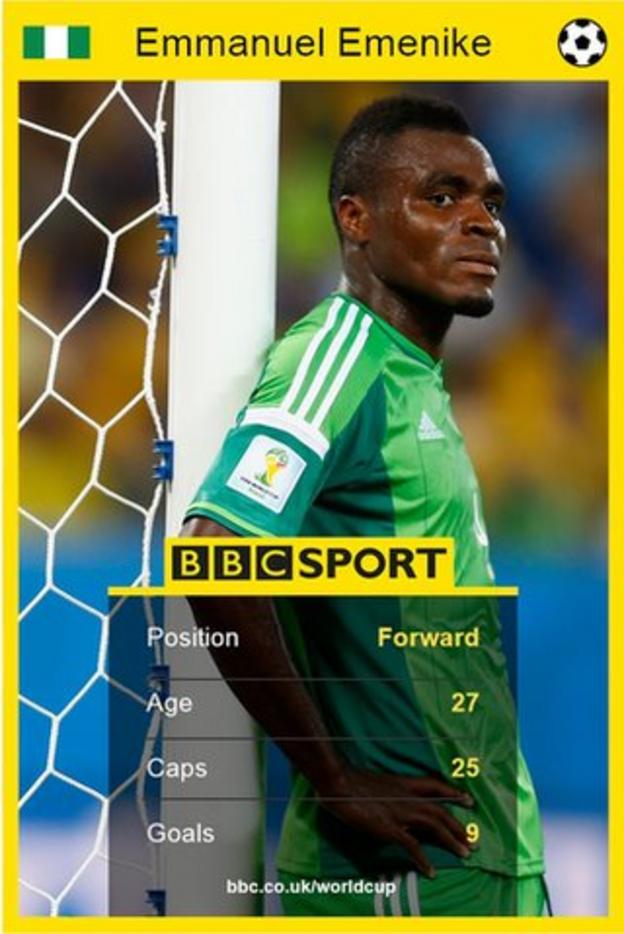 Nigeria cannot afford to lose their final group game against Argentina, and the African champions will finish top should they beat the South Americans.

They have the artillery to do it, with Emmanuel Emenike in attack.

The 27-year-old was a brute against Bosnia-Hercegovina, setting up Peter Odemwingie's goal as Nigeria recorded their first World Cup win since 1998. He also forced a good save from Asmir Begovic.

"Emenike was throwing his body around and the referee did nothing," said Bosnia coach Safet Susic.

"The goal Nigeria scored was as a result of a rough play by the striker, who crossed the ball for the goal."

Those battling qualities might upset the Argentine backline too, and his versatility in being able to play on the left and right will also pose problems.

Perhaps more importantly for this crucial game, the Fenerbahce striker is also one for the big pressure situations, having scored twice in the 2-1 first-leg World Cup play-off win against Ethiopia.

If Switzerland can get the better of 'The Beast' in midfield, they have a good chance of winning their crucial final Group E game.

Luis Garrido is the man in question; the shield in front of Honduras' defence. He has been almost an ever-present for coach Luis Fernando Suarez since 2012.

The 23-year-old only stands 5ft 7in and is likely to face his equal in stature - Xherdan Shaqiri of Switzerland.

The Bayern Munich player has great ability with the ball at his feet, but has yet to show it at this World Cup. In the 5-2 defeat by France, he covered 10,401 metres - more than the team average.

He also breached the attacking third on four occasions with runs and deliveries, and twice did the same in the opposition box.

Shaqiri has been disappointed with criticism directed at him.

"Even though I have not scored a goal or made an assist [in the first two games], I am always working," he said.

"I have created opportunities. For me, the most important thing is that we play well as a team. We did not succeed in this against France."

Shaqiri will have a chance to prove his worth, if he can tame 'The Beast'.

France won their previous encounter against Ecuador 2-0 in a friendly game in May 2008, Bafetimbi Gomis scoring twice.

Enner Valencia has scored seven times in his past six appearances for Ecuador, notching at least once in each game.

This will be the second meeting between Honduras and Switzerland.

Switzerland have never lost against a Concacaf team at World Cup (W1 D2).

Eleven of the past 12 goals Iran have conceded at the World Cup have come in the second half.

Nigeria have registered just one win in six previous attempts against Argentina in all competitions (D1 L4).

Argentina are looking to win all three group games at a World Cup, as they managed in 2010 under Diego Maradona.

Real Madrid striker Karim Benzema has scored three goals in two games for France and is just a goal behind the tournament top scorer, Brazil's Neymar, in the race for the golden boot.

His compatriot Just Fontaine set a record for the most goals in a single World Cup when he netted 13 times on the way to the semi-final in Sweden in 1958.

The 24-year-old had played only five times in as many years for France before the tournament, after scoring a hat-trick on his international debut.

Despite just one international goal in 53 months, he started at the World Cup and scored in all six games, including four in a third-place play-off win against Germany.

He broke his leg twice in 1960 and played his last international at the age of 27.

Salvador de Bahia, which hosts the match between Bosnia-Hercegovina and Iran, was the first capital city of Brazil.

The Unesco World Heritage Site is the centre of Afro-Brazilian culture and the city is renowned for its rich architecture, which includes the Sao Francisco Church and Convent, the Basilica Cathedral and the art deco Elevator Lacerda - which is believed to be the first public lift in the world.

The city will host six matches at the 2014 Fifa World Cup.