Ghana Football Association president Kwesi Nyantakyi is to sue the Daily Telegraph newspaper over its claim he agreed for the national team to play in matches others were preparing to fix.

The allegations came after a joint undercover investigation by the paper and Channel 4 programme Dispatches.

Nyantakyi told BBC World Service "the contents of the publication are not wholly true".

The GFA has also called in the police to investigate the allegations. 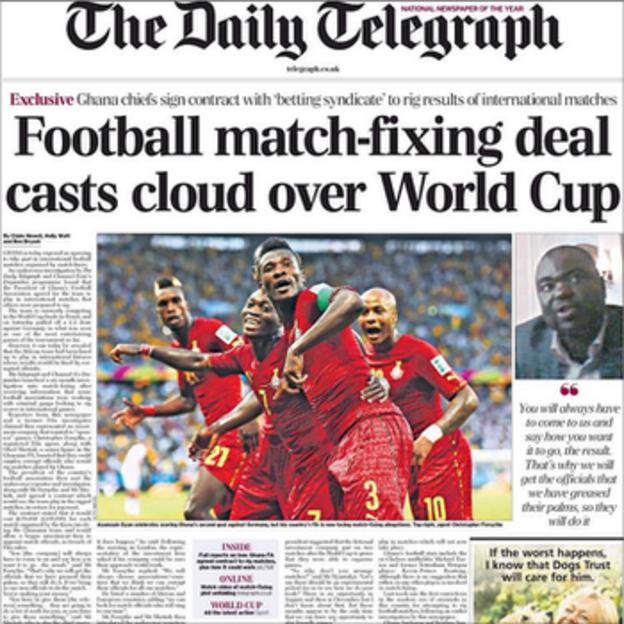 Nyantakyi told BBC Sport he has sent a seven-page response to both parties and is also considering taking legal action against the Channel 4 show.

The undercover investigation identified two people, one who was described as a licensed agent of world governing body Fifa and the other a Ghana club official, who allegedly said they could fix friendly matches involving the national side, who are currently involved in the World Cup.

None of the claims involve matches at the World Cup. The report claimed that Nyantakyi had agreed for Ghana to play in two proposed matches after the World Cup.

Strongly rejecting the claims, Nyantaki said: "I have not agreed to any match-fixing deal involving the GFA.

"I was given a draft contract which I indicated to their agent that I hadn't read and I also had some issues with it and so it will be premature for anybody to say the GFA is at fault."

When news of the undercover investigation first broke on Sunday, the GFA issued a statement saying it had called in the police to investigate two people for alleged misrepresentation.

A statement from the GFA said: "The Ghana Football Association has requested the Ghana Police Service to investigate two persons for misrepresenting the GFA with an attempt to defraud.

"The two were also allegedly filmed claiming that they would bribe GFA officials to ensure that the contract is signed.

"We wish to state that the GFA did not sign the contract as we waited for the response from the legal committee and that the two gentlemen did not make such corrupt offers to the GFA or its officials.

"We wish to assure the public that we will not tolerate such misrepresentations and we will seek strong sanctions against such individuals if such claims are found to be true."

The GFA added the matter had been reported to Fifa and the Confederation of African Football.

Ghana have drawn with Germany and lost to the United States so far at the World Cup but could still qualify from Group G if they beat Portugal on 26 June.