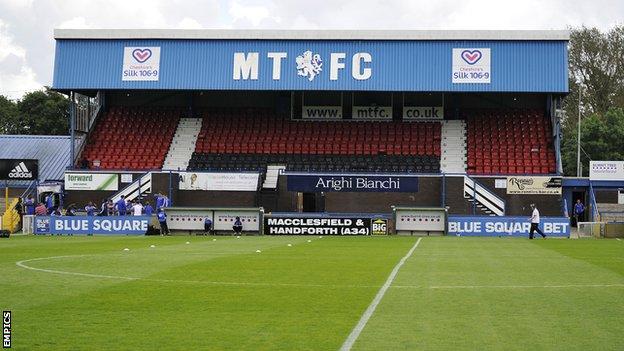 Businessman Amar Alkadhi, the majority shareholder of Macclesfield Town, has cleared the club's debts and will maintain ownership of the club.

New investors were hoping to complete a takeover of the Conference Premier side but that deal will not go through.

The Silkmen have struggled financially since being relegated from the Football League in 2012.

In a statement on the club website, Alkadhi said Macclesfield would be a "sustainable club going forward".

He added: "We are now in a position where we are over the financial seismic shock of relegation."

Macclesfield revealed that they were in talks with potential buyers in January, having reluctantly put plans to become community-owned on hold the previous month because of their financial troubles.

Earlier this month, associate director Andy Scott confirmed to BBC Radio Manchester that the potential investors had proved to the Football Conference that they had sufficient funds to pay off their debts.

However, they have been cleared by Alkadhi, who has been involved with the Silkmen for the past 11 years.

Macclesfield finished the 2013-14 season in 15th place in the Conference Premier, 10 points clear of the relegation zone.