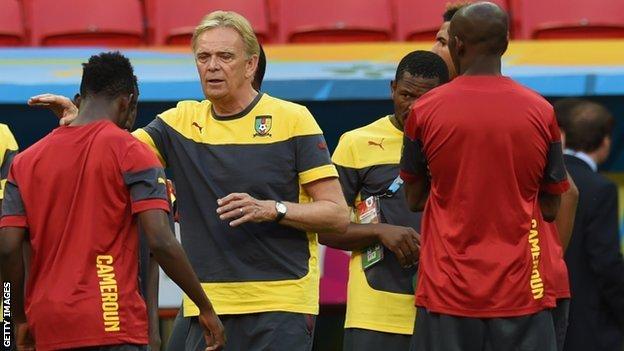 Coach Volker Finke has called for Cameroon to show their best side against Brazil on Monday so they can leave the World Cup on a high.

Cameroon cannot qualify for the next stage after a shambolic campaign of two defeats, a red card for Alex Song and fighting between team-mates.

"Nobody wants to leave the country with a bad impression," Finke said.

"We need to show a different face to save our reputation - of the team, the players and of Cameroonian football."

After being beaten 1-0 by Mexico in their opening match, Cameroon self-destructed against Croatia. They were a goal down when Song was sent off for elbowing Croatia striker Mario Mandzukic and capitulated to a 4-0 defeat.

The heavy loss would have been bad enough but was made worse by the ugly sight of Cameroon defender Benoit Assou-Ekotto headbutting team-mate Benjamin Moukandjo.

"I think everyone has seen behaviour that is unacceptable. The players need to be an example for everyone, (but) I am not somebody who makes big speeches calling for drastic punishments," added Finke.

Meanwhile, Cameroon captain Samuel Eto'o remains a serious doubt for the match against Brazil as he continues to struggle with injury.

The striker injured his right knee in the Indomitable Lions' 1-0 defeat by Mexico in Natal on 13 June and has not trained since.

Finke, 66, dismissed speculation that Eto'o might be about to call time on his international career.

"I don't think it's the moment. He has two, three or maybe four years left," said the coach of a player who has won 118 caps since making his international debut as a 15-year-old in 1997.