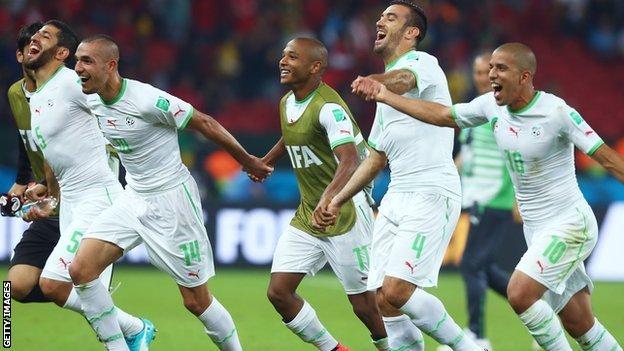 Algeria coach Vahid Halilhodzic says his side will be "daring" against Russia in Thursday's World Cup match.

The Desert Foxes beat South Korea 4-2 on Sunday and a victory over Russia - or a draw if South Korea fail to beat Belgium - will qualify them from the group stage for the first time.

"Russia are favourites but we have to fight and be daring and be ready to suffer," Halilhodzic said.

"We have to go in search of this qualification with even more audacity."

Algeria's victory over South Korea was their first at a World Cup since they beat Chile in 1982. And it was the first time an African side had scored four goals in one match in the tournament's history.

It was the perfect response to their 2-1 defeat by Belgium in their opening Group H match and puts Algeria on the brink of a landmark achievement.

Bosnian-born Halilhodzic said after the game: "I dedicate this victory to all the Algerian supporters who have waited for this for 32 years. This was a victory for pride.

"Now we play a third match, a play-off against Russia and anything is possible.

"After each match we will get better and better and this victory will do a lot for us. We are in high spirits."

Islam Slimani, who gave a man-of-the-match performance and scored his side's first goal, was one of five changes to Algeria's line-up from the first game and he paid tribute to Halilhodzic's strategy.

"This was a well prepared tactic, we closely analysed the Korean way of play. With some new fresh players we put in place a format that could trouble Korea.

"And the players followed my instructions to the letter. In the first half we were great in every area. In the second, we let up a little against a well organised rival, there were a couple of hot moments in defence but we were prepared for that."

The Sporting Lisbon striker added: "It was brilliant to score for my team, it's a wonderful feeling. I have to thank the coach for giving me the opportunity and I can say that all of the players gave everything for this win.

"It's still our aim to reach the round of 16, we have a chance and I hope we'll achieve that."

At least Algeria will not face a situation that cost them in 1982, back when final group matches were not synchronised.

Austria and West Germany went into their final group match knowing the outcome of Algeria's last game and orchestrated a 1-0 win for the West Germans which put both of them in the next round and earned the game the title the 'Non-Aggression Pact of Gijon'.