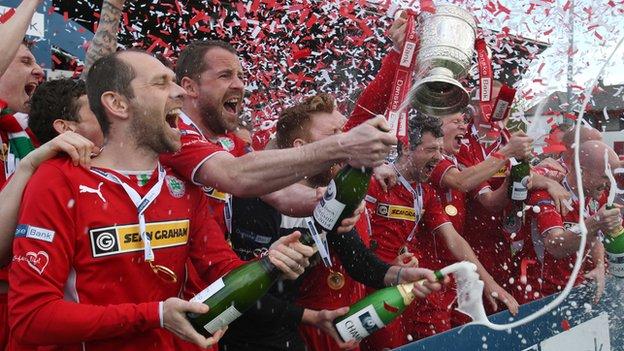 Irish Premiership winners Cliftonville have been drawn against Debrecen of Hungary in the second qualifying round of the Champions League.

Debrecen, who won their seventh league title last season, reached the group stages in 2009 and played Liverpool, losing both games 1-0.

Linfield are up against B36 Torshavn of the Faroe Islands in the Europa League.

It is the third season in a row Linfield have been drawn against a club from the Faroes. The Belfast club beat B36 in Champions League qualifying two years ago.

The away game will be former Northern Ireland striker Warren Feeney's first match in charge since taking over from David Jeffrey as manager of Linfield.

They will then play the home leg at Mourneview Park in Lurgan as Windsor Park is undergoing a major redevelopment project.

In 1995 Glenavon, managed by Nigel Best, beat Hafnarfjordur in the preliminary round of the Uefa Cup in 1995. The only goal over the two legs was scored by midfielder Sammy Johnstone.

The Europa League games are to be played on 3 and 10 July, with Cliftonville's Champions League ties on 15 and 22 July.

The Reds will be at home for the first leg, with the second being played in Hungary a week later.