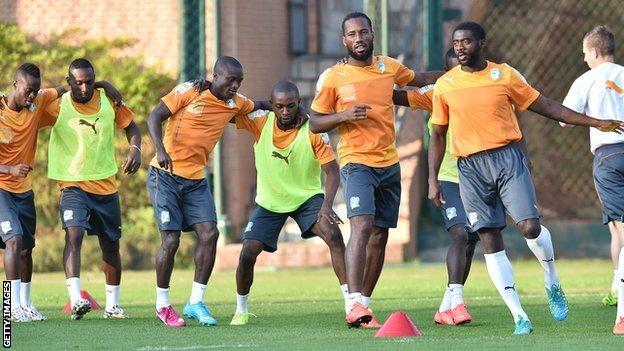 Ivory Coast president Alassane Ouattara has told the national team he will double their World Cup bonuses if they beat Greece and qualify from Group C.

A win over the 2004 European champions in Fortaleza on Tuesday will put the Ivorians into the next round.

The Ivory Coast Football Federation said on its website the aim was to "give the Elephants extra motivation".

Guillaume Soro, president of the National Assembly, visited the team at their World Cup base in Sao Paulo and is said to have told the players: "Show determination and you'll make it."

Ivory Coast are second in their group after a 2-1 victory over Japan was followed by a defeat by Colombia by the same score.

A draw would be enough for them to progress as long as Japan do not beat Colombia in their final game. A defeat would see Ivory Coast eliminated.

While the extra financial reward may not make much difference to the likes of Manchester City's Yaya Toure or Galatasaray's Didier Drogba, both of whom earn considerably more than that every week at their clubs, it would certainly be welcomed by reserve goalkeeper Sylvain Gbohouo.

He is the only member of Ivory Coast's squad still plying his trade in his homeland.