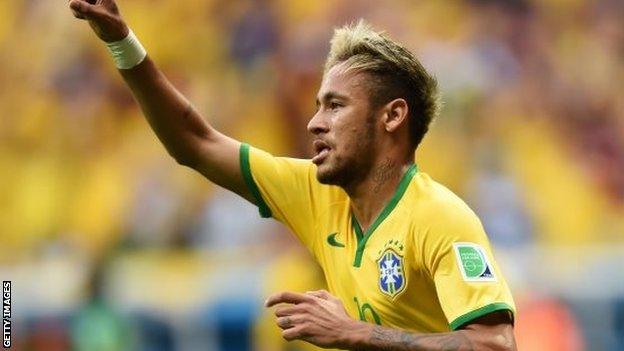 Watch highlights from the final round of group matches at the 2014 Fifa World Cup.

Mexico booked a last-16 tie against Netherlands after knocking Croatia out of the 2014 Fifa World Cup.

The Croats, who knew a win would put them through, survived a scare when a Hector Herrera strike hit the crossbar.

Neymar scored twice in a man-of-the-match display as Brazil rediscovered their attacking flair to overwhelm Cameroon and qualify for the World Cup knockout stage.

The 22-year-old produced two brilliant first-half strikes either side of a Joel Matip equaliser, with Fred and Fernandinho assuring their side of a place in the last 16 as winners of Group A.

Reigning champions Spain avoided the ignominy of finishing their World Cup campaign bottom of Group B with victory over Australia in Curitiba.

Goals from David Villa, Fernando Torres and Juan Mata prevented La Roja from suffering a third successive loss for the first time since 1991.

Netherlands finished top of Group B after goals from Leroy Fer and Memphis Depay gave them a win over Chile in a tempestuous encounter in Sao Paulo.

Both teams had already qualified for the second round after starting with wins over Spain and Australia.

Greece qualified for the last 16 of a World Cup for the first time with a dramatic win against Ivory Coast.

Celtic's Georgios Samaras converted a injury-time penalty to seal the win after Wilfried Bony thought he had put the Ivory Coast through with a second-half equaliser.

Colombia finished top of Group C to set up a last-16 tie against Uruguay after beating Japan, who were eliminated.

Japan needed a win to stand a chance of progressing but went behind when Juan Cuadrado scored a penalty following Yasuyuki Konno's foul on Adrian Ramos.

England's World Cup ended without a victory as they played out a tame draw with Costa Rica in Belo Horizonte.

This was a dead rubber after England's losses to Italy and Uruguay and there was nothing on show to offer any belated cheer at the end of a miserable tournament.

Costa Rica's status as the surprise package of Group D was cemented by a result that ensured they finished top - and will face Greece in Recife on Sunday.

Uruguay scored a dramatic late winner to knock four-time winners Italy out of the World Cup in a match involving another controversial Luis Suarez 'biting' incident.

Earlier in the game, Italy midfielder Claudio Marchisio was sent off for a studs-up challenge on Egidio Arevalo.

France topped their World Cup group to set up a last-16 tie with Nigeria after a goalless draw with 10-man Ecuador, who were eliminated.

Ecuador had captain Antonio Valencia sent off for a rash challenge on Lucas Digne before team-mate Christian Noboa shot wide when well-placed.

A hat-trick from Bayern Munich's Xherdan Shaqiri saw Switzerland beat Honduras to set up a tie with Argentina in the last 16.

The Europeans took an early lead as Shaqiri scored with a fine 25-yard strike, before he twice converted Josip Drmic passes to make it 3-0.

Jerry Bengtson had the best chance for Honduras, who finished bottom of the group, but his shot was cleared off the line by defender Ricardo Rodriguez.

Iran's hopes of qualifying for the World Cup last 16 ended as they lost to already-eliminated Bosnia-Hercegovina.

Carlos Queiroz's Iran side could have progressed to the second round with a win but their hopes were dented when Edin Dzeko gave the Bosnians a deserved lead with a crisp shot from 25 yards.

Roma's Miralem Pjanic slid home a second after the break. Reza Ghoochannejad pulled one back but Avdija Vrsajevic sealed it to give Bosnia their first World Cup win.

Argentina and Nigeria have both qualified for the last 16 of the World Cup despite two Lionel Messi goals condemning the African side to a 3-2 defeat in their final group game.

The Barcelona forward netted a fierce opener, but Ahmed Musa equalised within 80 seconds with a curling finish.

Messi made it 2-1 before the break with a 25-yard free-kick, but Musa grabbed his second after bursting through. Marcos Rojo scored Argentina's winner, knocking in a corner with a knee.

Ghana defender John Boye gifted Portugal the lead when he turned a cross into his own net, but Asamoah Gyan headed in an equaliser.

Ronaldo capitalised on a poor clearance to sweep home and restore Portugal's lead, but they could not find the three more goals they needed to go through.

Thomas Muller scored his ninth World Cup goal in as many games to ensure Germany finished top of their group.

Bayern Munich forward Muller struck a first-time shot from the edge of the penalty area in the 55th minute after goalkeeper Tim Howard had pushed out Per Mertesacker's header.

The United States failed to force Germany goalkeeper Manuel Neuer to make a save of note but still finished runners-up to make the knockout stages.

Algeria came from behind to earn the point that took them into the World Cup's last 16 for the first time.

But Algeria grabbed an equaliser in the second half - and eliminated their opponents - as Islam Slimani converted from Yacine Brahimi's free-kick.

Ten-man Belgium beat South Korea to top their World Cup group and set up a last-16 tie against the United States.

South Korea needed a win so the onus was on them to attack and they were helped when Steven Defour was sent off for a reckless tackle on Kim Shin-wook.

But Jan Vertonghen scored Belgium's winner when he slotted in after a Divock Origi shot was parried.

Watch highlights from the second round of group games here.

Watch highlights from the first round of group games here.