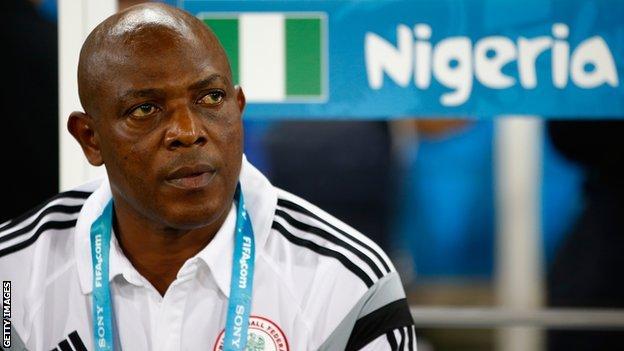 "People have a right to their opinions, but some people enjoy being destructive," said Keshi.

"When people who should know better, like ex-footballers, criticise the team, I don't enjoy it at all."

Nigeria are guaranteed to qualify from Group F if they avoid defeat by Argentina on Wednesday.

The Super Eagles would also go through to the next round, regardless of their result against Argentina, if Iran fail to beat Bosnia-Hercegovina in the group's other match.

It was Nigeria's 0-0 draw with Iran in their opening match of the tournament that brought stinging comments from Okocha, who played 75 times for his country and now sits on the technical committee of the Nigeria Football Federation.

Speaking as a television pundit for South African TV station SuperSport, Okocha said: "Keshi did not do enough work on the team. The tactical play was so bad, I hold Keshi responsible for this."

But Nigeria improved in their second match and a 1-0 win over Bosnia-Hercegovina - Keshi's first victory over European opposition - put them in a good position to reach the knockout stages.

And despite the west Africans having lost to Argentina at the 1994, 2002 and 2010 World Cups, Keshi is optimistic his players will find their form and show what they are capable of.

"The players have shown that they are good enough for the World Cup but they are yet to play to full potential," he added.

"Argentina are worried because in football anything can happen."

Meanwhile, speculation that Keshi has agreed to take over as the new boss of Bafana Bafana has been rejected by the South African Football Association.

Safa said in a statement that there was no truth in reports that Keshi had signed a two-year contract, insisting no decision has been made over the appointment of a new coach and would not be made until after the World Cup.