A Group G decider will see Germany's coach take on his predecessor, while Algeria can reach the second stage of the World Cup for the first time.

Thursday will see the last of the group-stage action before the tournament's first rest day.

Mark Lawrenson: "It is absolutely obvious that Cristiano Ronaldo is not fully fit and I do not rate Portugal's chances without him.

"Ghana gave it a good go against Germany but their problem was they were going for individual glory rather than making sure they won the game."

"The United States were probably hoping Germany had beaten Ghana and were already through by the time they played this one.

"I expected the US to get a positive result against Portugal on Sunday but it could be they are depending on what happens in the other match in Group G to see whether they make it into the last 16 or not."

"I was very disappointed with the Russians against South Korea. They were very wishy-washy all round and had no outstanding players on the night. I expect better from Fabio Capello's side against Algeria, though."

"Belgium left it late against Algeria but it showed one of their strengths - they have the depth to change the game from the bench and there are not too many teams that can do that.

"South Korea are well-organised and very fit, but they have no real quality." 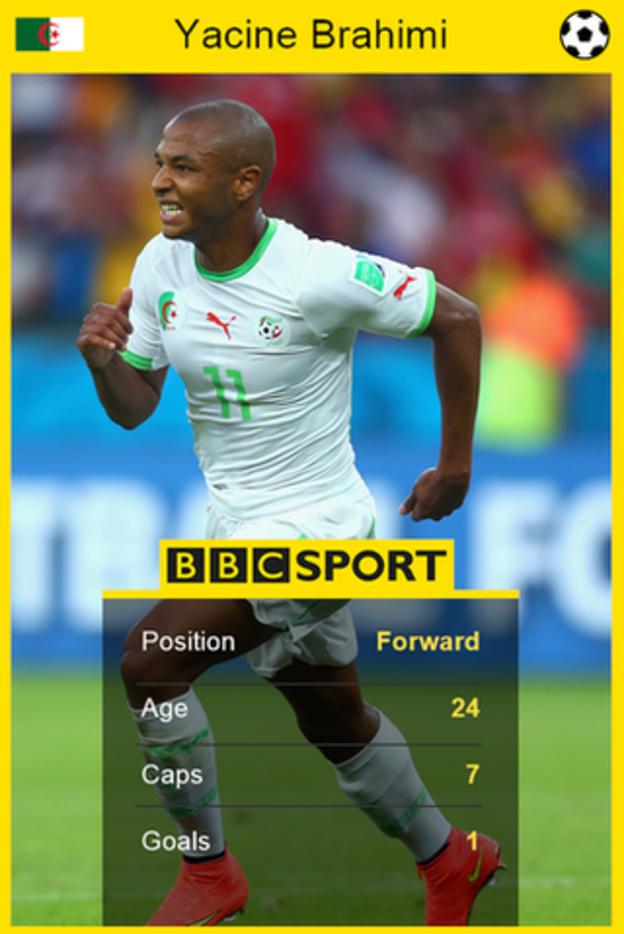 The 24-year-old announced himself to a wider audience with Algeria's final goal against South Korea as the African side romped to a 4-2 win to set up the chance to reach the knockout stages.

To do that, Algeria are likely to only need a draw against Russia, but the European side's need to win could afford Brahimi space on the break.

An impressive display could increase his chances of a move to the Premier League, with Everton and Newcastle reportedly interested in him.

The prize for winning Group G will likely be to avoid a last-16 tie with Belgium, so there is much at stake for Germany and the United States in Recife.

A draw will earn the European side top spot courtesy of goal difference, but this game will see a fascinating battle on the touchline.

For the respective coaches, the fixture throws up the added incentive of getting one over on an old acquaintance as Germany's Joachim Low served as assistant to his country's former boss Jurgen Klinsmann - now in charge of the US.

Despite signing a new contract in October of last year, 54-year-old Low is under pressure to guide the Germans to a first World Cup since 1990.

Klinsmann, meanwhile, is revelling in the chance to further the growth and popularity of football in the US, and how better to underline that development than with a win against his homeland?

Germany should be wary of the challenge, as Klinsmann has already masterminded wins over Italy and Mexico during his three years in charge.

Germany and the USA have met nine times in all competitions. There has never been a draw.

The US have conceded in each of their past 15 World Cup games against European opposition.

Belgium are unbeaten in eight World Cup group-stage games (W3 D5) and all three of their goals in this tournament have been scored by substitutes.

Algeria go into their meeting with Russia having become the first African team to score four or more goals in a World Cup match following their 4-2 win over South Korea.

Portugal achieved a pass accuracy of 88.08% against USA - their best rate in a World Cup match from 1966 onwards.

Ghana's Asamoah Gyan has equalled Roger Milla's record for most World Cup goals by an African player: both have five.

South Korea need to reproduce some of the form they showed in 2002 if they are to beat Belgium and give themselves a chance of qualifying for the next round.

They reached the semi-finals of the World Cup on home soil after famous victories over Spain and Italy.

Ahn Jung-Hwan's headed winner - a golden goal in extra time - arrived in the 117th minute of their last-16 tie against the Italians but came at a price for the midfielder.

Ahn left his club, Italian side Perugia, in the aftermath after a fall-out with owner Luciano Gaucci, who was outspoken and critical of his player's role in Italy's World Cup demise.

Brasilia - which hosts Portugal v Ghana - is Brazil's capital and fourth most-populated city, but its construction only began in 1956.

Within four years, the city was founded and given capital status as Brazil aimed to shift power away from its former coastal capital Rio, to a more central location.

It has since become a hub of political and economic activity, with a population of about 2.8 million people.

Designed by the late Oscar Niemeyer - a man recognised as a key influence on modern architecture - Brasilia is the only city in the world constructed in the 20th century to have been declared a World Heritage site by Unesco.