Uruguay's Luis Suarez has been accused of biting a player for the third time in his career after an incident with Giorgio Chiellini at the World Cup.

The Liverpool striker lunged at Italy defender Chiellini shortly before

Chiellini pulled his shirt down to show the referee a mark on his shoulder but no action was taken by the official.

Godin's winner means four-time champions Italy finish third in Group D at the 2014 Fifa World Cup, and exit before the knockout stages for the second finals in a row.

"Suarez is a sneak," said Chiellini. "I'd love to see if Fifa has the courage to use video evidence against him.

"The referee saw the bite mark too, but he did nothing about it."

Suarez, who committed a handball on the line to stop Ghana from scoring at the 2010 World Cup, told Uruguayan television: "These are just things that happen out on the pitch. It was just the two of us inside the area and he bumped into me with his shoulder.

"There are things that happen on the pitch and you should not make such a big deal out of them."

After the clash between the players, Suarez went to ground holding his mouth, apparently suggesting he had been elbowed.

As Chiellini, 29, ran after referee Marco Rodriguez, Uruguay forward Gaston Ramirez attempted to get the defender to cover his shoulder.

Fifa will wait to receive the referee's report before deciding whether to investigate, with a spokeswoman telling BBC Sport: "We will gather all the necessary elements in order to evaluate the matter."

The disciplinary committee of world football's governing body has the authority to "sanction serious infringements which have escaped the match ofﬁcials' attention".

The longest ban in World Cup history is eight games for Italy's Mauro Tassotti for breaking Spain player Luis Enrique's nose in 1994 with an elbow, while Zinedine Zidane was given a three-match ban for headbutting Marco Materazzi during the 2006 final.

Fifa vice-president Jim Boyce said: "There is no doubt Luis Suarez is a fantastic footballer but, once again, his actions have left him open to severe criticism.

"Fifa must investigate the incident seriously and take whatever disciplinary action is deemed necessary."

July 2010 - Handles on the line to deny Ghana a winner in the last minute of extra-time in the World Cup quarter-finals. Asamoah Gyan misses the resulting penalty and Uruguay win the shootout to reach the semi-finals.

November 2010 - Given seven- match ban for biting PSV Eindhoven's Otman Bakkal on the shoulder while playing for Ajax.

February 2012 - Refuses to shake hands with Evra at Old Trafford and is described as a "disgrace" by United manager Sir Alex Ferguson.

"I think that biting is not compatible with normal football practice," he told BBC Sport.

"This is really a serious case for our disciplinary commission."

Uruguay coach Oscar Tabarez tried to play down the incident and said there was a vendetta from certain parts of the media towards Suarez.

"I'd like to see the images first before making any comment. If it happened, then the referee probably didn't see it," said Tabarez.

"Despite mistakes Suarez has made, he is the target of certain media, a certain press."

Uruguay captain Diego Lugano also defended Suarez, whose two goals in the tournament so far came in the victory over England, and criticised the actions of Chiellini.

"What did you see? You saw this, really? You need to show me because I didn't see anything," said Lugano.

"Did you see it today or did you see what happened in other years? You couldn't have seen it today because nothing happened.

"The worst of everything is the attitude of Chiellini."

Italy manager Cesare Prandelli, who announced his resignation after the game, said: "I didn't see the images of Suarez but I did see the bite marks in Chiellini's shoulder."

Suarez was banned for 10 games for biting Chelsea defender Branislav Ivanovic during a Premier League match in April 2013.

He was also banned for seven games for biting PSV Eindhoven midfielder Otman Bakkal's shoulder while Ajax captain in 2010. 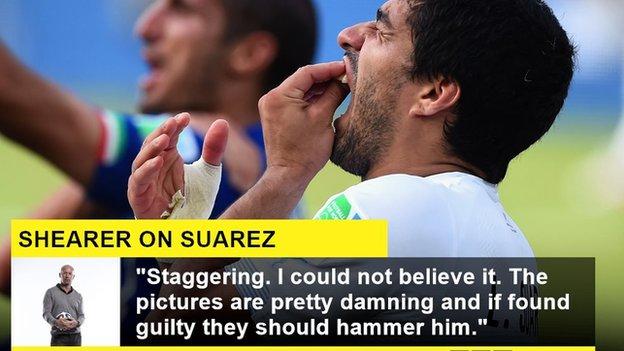 The forward courted controversy at the World Cup four years ago when he used his hand to block Dominic Adiyiah's goalbound shot in the 120th minute.

Suarez was sent off, while Ghana missed the subsequent penalty and went on to lose the quarter-final in a penalty shootout.

"I could not believe it," he said. "The pictures are pretty damning and, if found guilty, they should hammer him.

"He has built up his reputation over the last 12 months and to come into the tournament and do that, I am lost for words.

"I can understand why the referee did not see it clearly but they can look at video evidence and there is no way he can get away with that. It is pretty clear. What on earth is he thinking of?"

"Let's see how strong Fifa are," he added. "There will be people who will defend him, but I don't know why. I'd make him wear a gumshield."