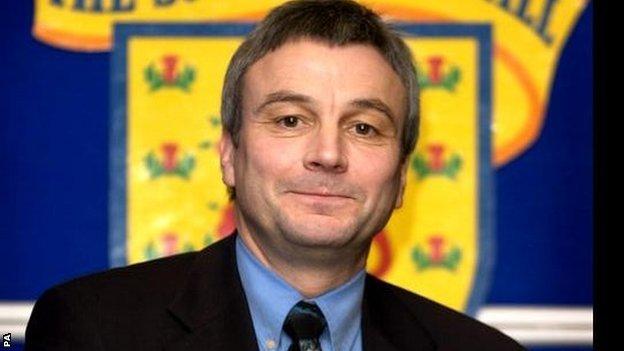 Taylor was in charge north of the border for eight years from 1999 before joining European football's governing body Uefa.

SFA president Campbell Ogilvie said: "David remained a friend and supporter of the Scottish FA and the game in this country. He will be dearly missed by all of us."

Uefa confirmed his death after illness.

Born in Forfar in 1954, Taylor was educated at Dundee High School before graduating from Edinburgh University with a degree in law.

He oversaw the appointments of Berti Vogts and Walter Smith as Scotland manager before leaving the SFA in 2007 to succeed Lars-Christer Olsson as general secretary at Uefa.

"On behalf of his friends and former colleagues at the Scottish FA, and throughout Scottish football in general, I would like to express our profound sadness at the tragic news of David's death," Ogilvie said.

"It was his love of Scottish football and, in particular, the Scotland national team that stirred his passion during his tenure as chief executive."