Seconds out, round two. It is knockout time at the 2014 Fifa World Cup.

A South American blockbuster of a day awaits on Saturday, with hosts Brazil taking on Chile and Colombia facing Uruguay. There are no second chances from now on.

Mark Lawrenson: "If Chile sit back, which is not their natural game, they will come unstuck anyway and the one thing we have seen against Brazil is that you can get at them.

"So Chile will think they have a chance.

"But when you play Brazil at this tournament, you play the whole nation, and that should see them through."

Lawrenson: "The Colombians love a tackle and they are very physical and in your face, but they have also got some outstanding attacking players such as James Rodriguez and Juan Cuadrado, and I am a massive fan of both. Jackson Martinez is lively too.

"I just think they look a better team than Uruguay and, of course, this is a Uruguay team without the banned Luis Suarez.

"It will be interesting to see how Oscar Tabarez's side react to that situation, but I think Colombia will have too much for them regardless. " 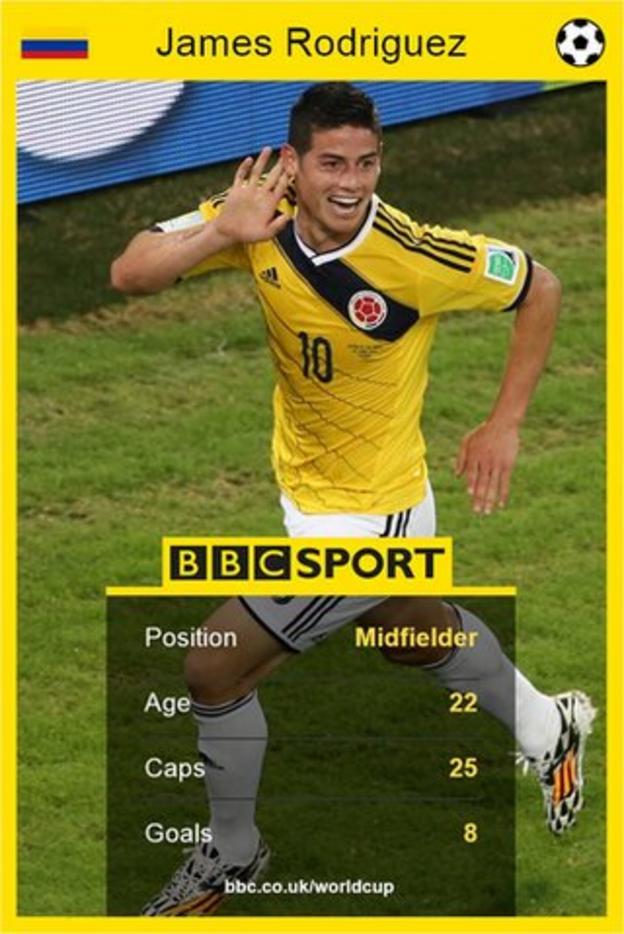 It would be rather discourteous if we did not pay tribute to Colombia's bright, young star.

Monaco's attacking midfielder James Rodriguez, 22, has been sensational in Brazil. He has scored three goals, including one sublime finish in the 4-1 win over Japan.

In the same match Rodriguez, who only came on at half-time, covered 5,268m, with the team average just under 9,000m. He also contributed to five of the 14 deliveries/solo runs into the opposition area - highlighting how dynamic the former Porto player can be.

He provided two assists, had three shots and scored one goal. Uruguay have been warned.

What they say about him:

"I think what James has done today simply demonstrates what we expected from him. From the beginning, he has shown he is very well physically and very fit and we can expect a lot from him." Colombia coach Jose Pekerman

"He is improving so much. It's incredible to see. He is playing a very important role in the World Cup.'' Colombia striker Jackson Martinez

The duel between Real Madrid's Brazil left-back Marcelo and Barcelona forward Alexis Sanchez will be fascinating.

These two players are very familiar with each other - although this stage dwarfs even the Bernabeu and Nou Camp.

Alexis managed 19 goals for the Catalan giants last season and has already scored once for Chile here, their first goal of the tournament in the 3-1 win over Australia.

The 25-year-old occupies the right-hand side of the forward line. In the 2-0 win over Spain, he displayed his tenacious side with three fouls in the first half as Chile tried to contain the threat of the world champions.

But he also proved a difficult player to take the ball from, with Spain failing on three of the four occasions they tried to dispossess him.

Marcelo looks likely to mark Alexis. The Fifa heat map shows the attacking full-back spent most of his time in the 4-1 win over Cameroon around the centre-left of the pitch, although he did not neglect his defensive duties.

But the 26-year-old is renowned for bombing down the left wing, and he made a remarkable quarter of his side's 40 forays into the opposition half.

Brazil have won all three previous World Cup fixtures against Chile, all of which have been in the knockout stages of the tournament (round two in 2010, round two in 1998 and the semi-final in 1962).

Chile have conceded 11 goals in their three meetings with Brazil at the World Cup finals, an average of 3.7 per game.

Neymar has scored four times in three matches at the 2014 World Cup and eight times in his past six for Brazil.

Eduardo Vargas has scored in each of his past two appearances for Chile against Brazil, including a goal in Belo Horizonte in April 2013.

Colombia and Uruguay's only previous World Cup encounter was in the group stages of the 1962 tournament; the Celeste won 2-1 despite Colombia opening the scoring. It is Colombia's only previous game against a fellow South American team at the World Cup.

Uruguay have won six of their past eight encounters with Colombia (also drawing one and losing one).

The past nine encounters between Colombia and Uruguay have produced 32 goals; an average of 3.6 per game.

Colombia have won as many games at this year's World Cup (three) as they did in their previous 13 games in the competition.

Chile will be sick of the sight of Brazil having been knocked out by them every time they have gone beyond the group stages in the World Cup.

Brazil are going for a second-round treble, have beaten Chile in the last 16 of the World Cup twice in the previous four World Cups.

They hosts won 4-1 in 1998 in France, with Ronaldo and Cesar Sampaio scoring twice, and were 3-0 winners in 2010 in South Africa, thanks to goals from Juan, Robinho and Luis Fabiano.

Brazil went on to lose the World Cup final to hosts France in 1998, and were knocked out by the Netherlands in South Africa in 2010.

They were Chile's only last-16 appearances, apart from when they hosted the tournament in 1962, when they were again knocked out by Brazil - this time in the semi-final. Brazil went on to win the trophy.

Belo Horizonte - where Brazil will face Chile - is the nation's third-largest city. It is the capital of Minas Gerais, considered by many to be Brazil's friendliest state.

The people may be nice but the city holds very few fond memories for England fans. The national side fell to a humiliating 1-0 defeat by the United States in 1950 before ending this year's disappointing campaign with a 0-0 draw against Costa Rica in the city on Tuesday.

It is the birthplace of Brazil president Dilma Rousseff. The daughter of a Bulgarian immigrant, she is the country's first female president.