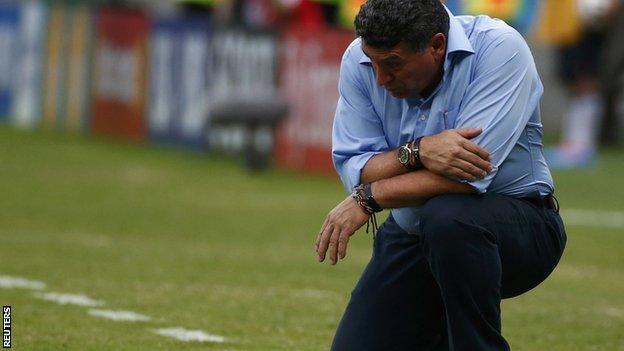 Honduras coach Luis Fernando Suarez has announced he is stepping down from the role following his team's elimination at the Fifa World Cup group stages.

The Central American nation lost all three of their matches - against France,Ecuador and Switzerland - to finish bottom of Group E.

"I think a change is necessary for the benefit of the Honduran team," said Suarez, 54, after Wednesday's exit.

"I am not satisfied by what we achieved at the World Cup."

The Colombian took charge of Honduras in March 2011 after leading Ecuador to a last-16 defeat against England in the 2006 finals.

Honduras qualified for their second successive World Cup by finishing behind the United States and Costa Rica in Concacaf qualification, winning four and drawing three of their 10 matches.

But a 3-0 defeat by Switzerland in their final group game ended their hopes of reaching the knockout stage for the first time.

"I think the team will have good results in the future. But I think someone can replace me and produce different results.

"I am sad I didn't manage to fulfil the mission they entrusted me with. I will be always be connected and listening to news about Honduras and always try to help them."

During his three-year reign, Suarez led Honduras to the semi-finals of two Gold Cups and coached the Olympic team that reached the quarter-finals at London 2012.