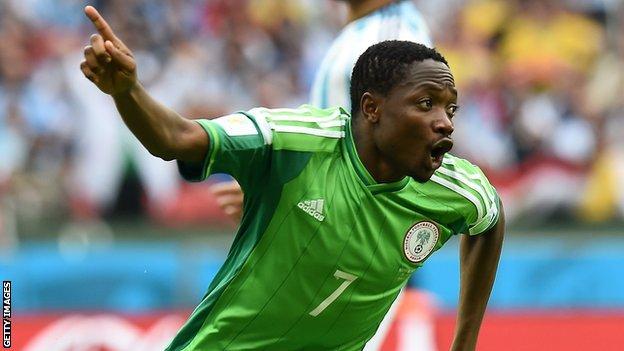 Ahmed Musa is delighted to have become the first Nigerian to score more than once in a World Cup match.

He scored twice against Argentina on Wednesday as Nigeria lost 3-2 but still reached the knockout phase.

"You sometimes have those games where everything you strike seems to go in - it was my day," Musa told BBC Sport.

"I've scored goals for Nigeria, but never a brace in an important game. I'm so happy it has happened for my country at the World Cup."

Argentina and Nigeria both qualified for the last 16 of the tournament in Brazil, with Lionel Messi scoring twice for the South Americans to help his side finish top of the group.

The Barcelona forward netted a fierce opener, but Musa equalised within 80 seconds with a curling finish. It was the first time in World Cup history that two opposing teams had both scored inside the first five minutes.

Musa has frightening pace and it's hard to play against him. Players like Musa will make life difficult for anyone. We are lucky to have Messi, Nigeria is lucky to have Musa

Messi made it 2-1 before the break with a 25-yard free-kick, but Musa equalised again after bursting through the defence.

In the second half Marcos Rojo scored Argentina's winner when he knocked the ball in with his knee following a corner.

"The result wasn't right on the day but still, we are proud of our qualification because my goals would have been worthless had we failed [to make the second round]," said Musa.

"To share the stage with my team-mates who made it all happen and score two goals like Messi in a World Cup game - it's a dream come true.

"Some things happen in your career that will never fade or erase from your memory. These two goals and this moment will stay with me forever."

Nigeria will face France in the next round in Brasilia on Monday, and the pacy winger nicknamed 'Air Nigeria' by fans, knows the Super Eagles need to be at their best against the 1998 World Cup winners.

Musa said: "We need to defend well, take our chances up front and learn from the Argentina game. In the second round, it's winner takes all. I know with hard work and God's support we shall make history.

"But prayers without hard work is nothing, so we need to be at our best against France to make it happen."

Nigeria coach Stephen Keshi, who made his own history at this tournament by becoming the first Nigerian to take the Super Eagles past the group stage, praised Musa for his individual performance.

"It's a team effort but you need to let Musa know he was awesome," Keshi told BBC Sport.

"I said Messi is from Jupiter, but Musa is from another planet with pace like that."