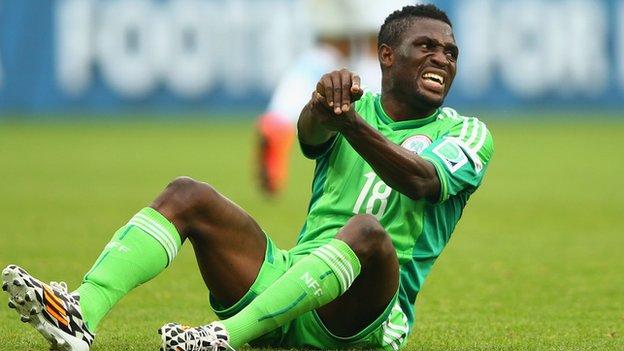 Nigeria midfielder Michael Babatunde has been ruled out of the rest of the World Cup with a fractured wrist.

The 21-year-old, who was in the starting line-up for the games against Bosnia-Herceogovina and Argentina, has undergone surgery on the injury.

"Unfortunately, he is ruled out of the tournament because it will take at least three weeks for that surgery to heal," said coach Stephen Keshi.

Nigeria finished second in Group F and face France in the last 16 on Monday.

Babatunde, who suffered the injury in the 3-2 defeat by Argentina, has joined his team-mates in Campinas ahead of the trip to Brasilia for the match.

Keshi added: "We are sad about [Babatunde's injury] but we have people who can fill in for him very well and I think we have to go and win for him now."

Meanwhile, Keshi revealed Victor Moses has a muscle strain that was discovered by the team's medics after the first game against Iran and the winger had been advised to rest.

"We can understand that all players want to play at the big stage but it's up to us and the medical team to manage their career and balance it with due diligence regarding their health and that is why we have not played him," Keshi said.

"We hope he should be back in training later on Thursday".

Moses watched Wednesday's match against Argentina from the stands with technical officials but could be fit to face France.