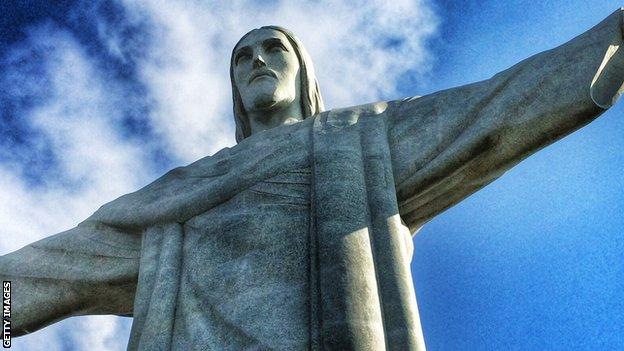 Goals, controversy, hat-tricks and first-round shocks - the 2014 World Cup has been box-office and record-breaking.

That's an average of 2.83 goals per game, but aside from the goal-getters, who else has shone?

Alongside statisticians Opta, BBC Sport presents the statistical team of the World Cup group stages, with each player in the tournament rated on over 250 on-the-ball actions, including goals, assists and clean sheets.

BBC Sport also conducted a vote based on a selected shortlist to ask for your World Cup XI so far and the results are:

Nigeria's goalkeeper has helped the Super Eagles out of the group stage and into a second-round match against France on Monday. The Lille goalkeeper, 31, kept clean sheets against Iran and Bosnia-Hercegovina and made 18 saves in the three matches, more than any other goalkeeper in the tournament. Joe Hart made just the one save in his two matches for England, while Ben Foster made two saves as his replacement against Costa Rica.

Italy may have exited the tournament at the group stage but that didn't stop the 29-year-old Juventus defender from making 10 tackles, 14 clearances and nine interceptions. Italy only conceded three goals but at the other end only managed to find the net twice, both against England.

Your vote: Daley Blind (The Netherlands)

The Cardiff City defender made 28 clearances during the group stage as Chile won two of their matches to finish in second and qualify for the last 16. The 26-year-old's pass completion rate was 93% from 207 passes.

No-one made more than his five blocks in the group stage as Belgium eased into the second round with a 100% winning record. The 36-year-old Bayern Munich defender played in every minute of the three matches. In comparison, Phil Jagielka made England's highest amount of blocks - two from his two matches.

Of all defenders only Spain's Jordi Alba made more passes in the opposition half than 31-year-old Alves. The Barcelona man played every minute as Brazil topped Group A with two wins and a draw.

The 26-year-old Fiorentina winger has impressed with his speed, pace and dribbling ability. He has provided three assists as Colombia topped Group C, the joint-most with the Netherlands's Daley Blind.

After scoring once in 2006 and twice in 2010, the Bayern Munich midfielder has already netted three times in this tournament. The 30-year-old has also made one assist as the Netherlands progressed to the second round as one of only four teams with a 100% record.

Monaco's £38.5m man has scored or assisted a goal every 45 minutes on average, the best rate of any player to have played more than 100 minutes at the tournament. Rodriguez, 22, has scored in all three games and has also created two other goals as Colombia won all of their games. Wayne Rooney was England's joint-highest goal scorer and assist maker with one each.

The host nation's golden boy has not disappointed as he tops the goal-scoring charts on four with Argentina's Lionel Messi and Germany's Thomas Muller. Barcelona's 22-year-old has the best conversion rate (44%) of any player to have attempted at least eight shots. England's Daniel Sturridge had a conversion rate of 9.09% with one goal from his 11 shots.

Your vote: Arjen Robben (The Netherlands)

The Opta scoring system is devised by working out an overall score based on over 250 statistical events, with each event having a positive/negative score awarded based on its outcome. More important stat categories are weighted heavier than others, so crucial stats during games make a difference (goals, assists, clean sheets, etc).