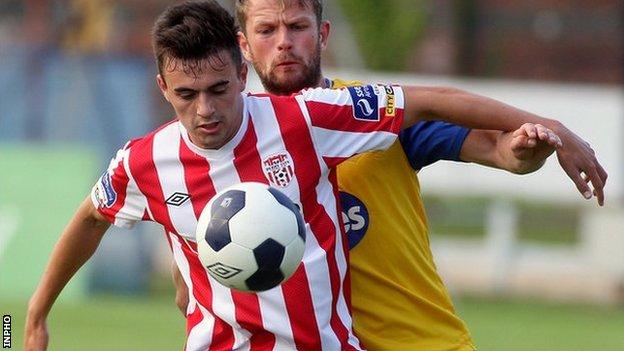 Towell's shot took a wicked deflection over Ger Doherty's head in the fifth minute of added time at the Brandywell.

Kurtis Byrne put Dundalk ahead with a clinical finish on 44 minutes but Barry McNamee drilled home a minute later.

Michael Duffy fired in a spectacular goal on 51, then Cliff Byrne was sent-off for elbowing Pat Hoban after 70.

In front of a disappointing crowd, Rory Patterson looked to have opened the scoring for the home side in the 25th minute when he nonchalantly lifted the ball over the goalkeeper but the flag went up for offside.

With a minute of the first half remaining, Kurtis Byrne grabbed his fourth goal of the season by guiding the ball into the bottom corner of the net.

McNamee levelled before the break when he created space in the box and dispatched a low a low left-foot shot past Peter Cherrie.

Dane Massey, Brian Gartland and Towell had other scoring opportunities for Stephen Kenny's side in the first half.

Duffy nudged the Candystripes in front when he unleashed a right-foot 35-yard effort into the top corner six minutes after the interval.

Substitute Mark Griffin smashed the ball against the bar for Dundalk, then Derry skipper Byrne was red-carded for an alleged elbowing offence on Hoban.

Peter Hutton's outfit appeared to have secured maximum points, but Towell's late intervention ensured the visitors left with a share of the spoils.

Derry remain seventh in the table and and their next game is the first leg of their Europa League first qualifying round tie with Aberystwyth Town at the Brandywell on Thursday, 3 July.