The three-time champions needed extra time to beat Algeria in the last 16 and suffered a bout of illness in midweek, but they were comfortable victors over a disappointing France in Rio de Janeiro.

Hummels got the better of Raphael Varane to score what proved to be the winning goal and Germany can now prepare for a meeting with Brazil in Belo Horizonte on Tuesday after the hosts beat Colombia.

Germany goalkeeper Manuel Neuer gave another faultless performance and Joachim Low's men deserved their win against a France side who failed to hit the heights of earlier in the tournament.

It is 60 years to the day since Germany overturned a two-goal deficit to upset Hungary in the 1954 final, and this will go down as another memorable day in their history. 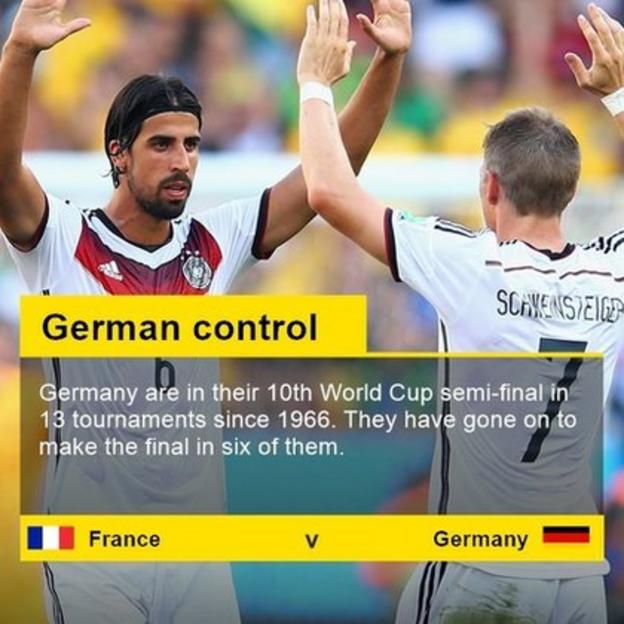 In the build-up, Low dismissed talk of France seeking revenge for 1982, when Germany goalkeeper Harald Schumacher escaped punishment for a brutal challenge on Patrick Battiston and went on to save two penalties as his side came through a shootout to reach the final.

But what could not be ignored was Germany's greater experience and, despite a reconfigured starting line-up and doubts over their health, they again showed their international pedigree.

Hummels returned to central defence after a bout of "flu-like symptoms", with Per Mertesacker unexpectedly the man to make way as Germany looked to contain France's quick forwards.

Philipp Lahm moved from midfield to right-back in place of Shkodran Mustafi, Sami Khedira coming into midfield, and there was a surprise start for 36-year-old Miroslav Klose in attack.

Germany looked far more balanced than against Algeria in their last match, and a period of sustained pressure told when Hummels held off Varane to guide home a Toni Kroos free-kick.

It was the first time France had gone behind in the tournament and the first time they had conceded in the opening half. Their afternoon could have got worse when Mathieu Debuchy challenged Klose in the box, only for referee Nestor Pitana to ignore the Germany appeals.

Les Bleus were struggling to find any rhythm as Bastian Schweinsteiger, Khedira and the excellent Kroos dominated the midfield, but they soon began to expose Germany's dangerously high defensive line.

Antoine Griezmann broke clear and crossed for Mathieu Valbuena to force Neuer into a stunning one-handed save and Karim Benzema's close-range follow-up was deflected over the bar.

Benzema went close twice more as France gained some momentum before half-time, and they maintained it after the break as Yohan Cabaye, Paul Pogba and Blaise Matuidi gained control of the central areas, allowing Griezmann and Valbuena to cause damage from wide.

But Germany appeared to realise the increased threat, dropping deeper and limiting France to a Varane header and Matuidi strike that were both comfortably saved by Neuer.

Low introduced Andre Schurrle from the bench and he significantly boosted the tiring Germans, although he might have done better with two opportunities on the counter attack.

France manager Didier Deschamps turned to Olivier Giroud, who set up Benzema in stoppage time, only for Neuer to repel his angled drive with a strong fist.

The atmosphere inside this iconic ground was relatively flat, reflecting an unspectacular encounter, but at the end the Germany celebrations and France tears illustrated just how much the result meant.

"Although our adventure in Brazil ends here and we're sad, disappointed and frustrated, we'll move on.

"I hope this group of players can play together for a long time. I have a lot of work to do with them, but things are definitely promising.

"Today, there wasn't much between the two sides. I thought we were a little bit timid at first and they scored early. After that, we showed promise. We created chances and could have been more clinical, but Manuel Neuer had a good game."

"We played well, we played with a compact defence. They had some long balls against us but we did a classy job taking care of those.

"Our midfield did a very good job disrupting their attack. We didn't have any organisation problems.

"It was an incredibly exciting match but you can't expect anything else at the World Cup. Both teams were equals. Our team had fought hard to the end."