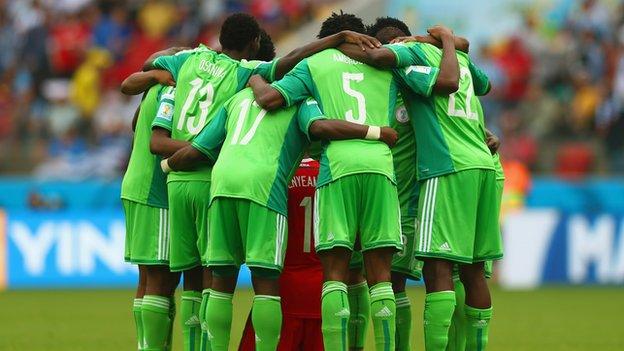 Nigerian President Goodluck Jonathan has assured the country's senior players at the World Cup that the squad will be paid their bonus money.

The president's guarantee comes a day after after the Super Eagles players boycotted training on Thursday.

BBC Sport understands Nigeria's players fear they will not be paid after the tournament - a situation that occurred after last year's Confederations Cup.

Nigeria play France in the last 16 of the tournament on Monday.

While the players have demanded they receive their money now, the Nigerian Football Federation (NFF) is not in a position to make that payment until it receives its prize money from Fifa.

It is that impasse that has led President Jonathan to intervene.

There also appears to be an issue over the amount the players think they are owed.

BBC Sport understands the players believe they are each $15,000 (£8,800) short of what they were expecting for reaching the last 16 in Brazil.

It is thought the problem lies in the interpretation of the bonus structure, with the players believing they will only receive $10,000 for their win 1-0 over Bosnia-Hercegovina and $5,000 for the 0-0 draw with Iran.

The players' understanding was they would receive a $30,000 payment for qualifying from the group.

However, it is believed the NFF's offer to the players includes the agreed win and draw bonuses plus 30% of the prize money due from Fifa for reaching the knockout stage.

This is understood to rise to 40% of the prize money from Fifa if Nigeria were to win their round of 16 match, 50% for a quarter-final victory, 60% for a win in the semi-final stage and 70% for lifting the trophy.

While all parties work to find a resolution to the misunderstanding, coach Stephen Keshi has insisted it will not affect the team's performance.

And it has been confirmed to the BBC that the players will travel to Brasilia on Friday as scheduled and will train in the evening and over the weekend.

It is not the first time the Super Eagles have made a stance over money - last year they arrived late for the Confederations Cup in Brazil.