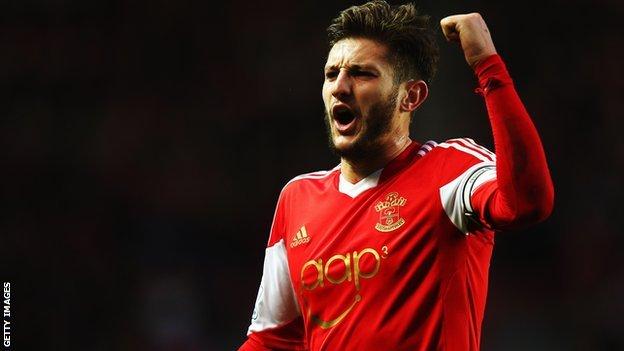 Lallana, 26, will complete his medical and other formalities of the move from Southampton this weekend, before being announced as the club's latest signing.

Liverpool had two bids for the England midfielder rejected before the World Cup began, but reopened talks after he returned from Brazil.

Lallana will be reunited with Rickie Lambert at Anfield, while Luke Shaw has left Saints to join Manchester United.

Lallana has been at Southampton for 14 years, having joined the club as a 12-year-old from Bournemouth, who hold a 25% sell-on clause.

He featured in all three of England's games at the 2014 Fifa World Cup, as a second-half substitute in the defeats by Italy and Uruguay, and from the start in the 0-0 draw with Costa Rica.

Lallana's sale would take Southampton's summer transfer earnings to £56m, with Shaw departing for £27m and Lambert sold for £4m.

Executive director Les Reed has "guaranteed" new manager Ronald Koeman will be able to reinvest "any revenues" in the team.

Liverpool have already agreed to sign Bayer Leverkusen midfielder Emre Can, who will join the club on 1 July.

They have been linked with Sevilla left-back Alberto Moreno, while teenage forward Divock Origi, who scored Belgium's winner in their World Cup encounter with Russia, has also emerged as a target.