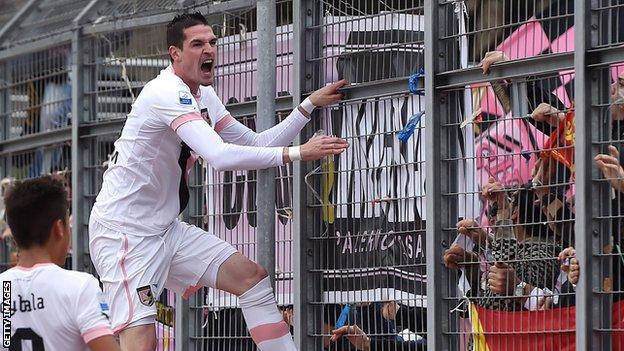 Norwich City will complete the signing of Northern Ireland striker Kyle Lafferty from Palermo for an undisclosed fee on 1 July.

The 24-year-old will sign a three-year deal at Carrow Road with the option of a further 12 months.

He had completed his Carrow Road medical earlier in the week, as reported by BBC Radio Norfolk.

Lafferty scored 11 times last season for the Serie B champions and had a spell at Swiss club Sion in 2012.

The Enniskillen-born forward was on target nine times in 37 appearances for Northern Ireland and played 137 times during four years at Rangers, scoring 38 goals.

"Norwich is a team that wants to get promoted back to the Premier League at the first opportunity, so I'm excited to come here and start playing football for a team like this," he told the club website.

"I've played in the Championship before and I've played against Norwich, and the things I noticed about the club were the fans and the football they played.

"Speaking to the gaffer, everything he said and everything he wants me to do, it's good to have someone like that believing in me. I can't wait to get started."