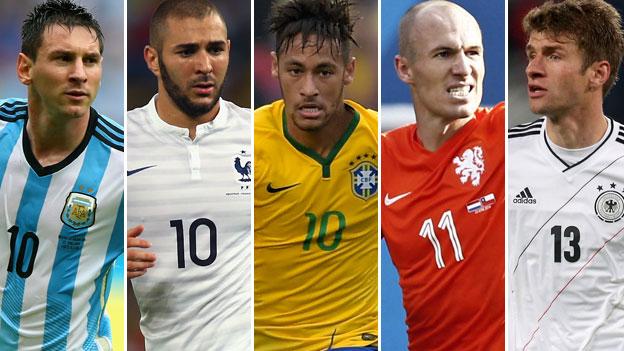 The South American dream lives on as this thrilling World Cup in Brazil shifts emphasis from the group stage into the knockout phase.

Romantics and those without a vested interest have visions of Brazil and Argentina meeting in Rio's Maracana in the final on 13 July - with iconic number 10s Neymar and Lionel Messi fighting for the right to bring glory to their country.

And as the last-16 games begin, the time has come for all those left to study the routes they may have to navigate to reach that final destination.

England and Italy may have fallen by the wayside but there is still a strong European presence in the shape of the Netherlands - so exciting under new Manchester United manager Louis van Gaal - Germany, France and those dark horses of Belgium, built around their emerging "golden generation" under the stewardship of coach Marc Wilmots.

The Americas have a strong representation as they take up half of the final places, and the odds are still against a team from Europe defying history and winning here in South America.

On the evidence so far - Manaus apart - there is nothing in the climatic conditions to suggest this is an impossible task and the Dutch, in particular, can emerge as serious contenders if the old imponderable of team spirit can be maintained.

In Bayern Munich's Arjen Robben, they have had arguably the standout performer of the early stages, certainly someone who can stand comfortably alongside Neymar and Messi as the World Cup moves up a gear.

The way forward is laid out in front and Brazil and Argentina may view the maps with contrasting emotions if they are to take part in that grand conclusion in front of the watching world.

Brazil are in the top half of the draw, that has a distinctly South American flavour, whereas Argentina may feel they have the slightly less hazardous task to progress.

If there are dark horses, it may be worth looking towards the Netherlands; losing finalists to Spain in South Africa four years ago but seemingly more fluid and united under the charismatic Van Gaal

Luiz Felipe Scolari's attempt to secure his place in Brazil's sporting history by winning a second World Cup has been built on the foundations of Neymar, who has lived up to national expectations, but may flounder on a somewhat less impressive defence.

Chile, inspired by Barcelona's Alexis Sanchez, will provide the toughest test so far for the hosts and, even if they are successful, Brazil will have to overcome another familiar opponent in either Colombia or Uruguay - now robbed of their greatest performer Luis Suarez - in the Maracana next Saturday.

In the same half of the draw, France have looked impressive, despite only qualifying for the finals through the play-offs.

An old football rivalry could be revisited in the last eight if they overcome Nigeria and Germany beat Algeria, who qualified for the last 16 amid such joyous scenes with a draw against Fabio Capello's Russia.

Germany have looked ominous as ever, particularly in disposing of Portugal 4-0, but the French may just fancy their chances of scoring goals after watching that wonderfully open 2-2 draw between the Germans and Ghana, which may have been the World Cup's finest game so far.

With each of those teams cluttered in the top half of the draw, Alex Sabella's Argentina may just be the one side everyone fears.

They will be strong favourites to overcome Switzerland, before a potential last-eight meeting with either Belgium or the United States, whose performances have captured the imagination of their nation in a way they have never done before.

A look into the crystal ball throws up the enticing prospect of two South America v Europe semi-finals, with the possibility of Brazil facing Germany and Argentina confronting the Netherlands.

The idea of Brazil not reaching the final at home is unthinkable. The 1950 World Cup final loss to Uruguay at the Maracana is still a black-bordered day in this country's history, even beyond the sporting context.

Brazil are a team that thrives on momentum, as they showed in winning the Confederations Cup here last summer, but the test will truly come as they face better opposition and the expectation and pressure grows in a country with a fevered and uniquely demanding football following.

They must still be favourites but, if there are dark horses, then it may be worth looking towards the Netherlands; losing finalists to Spain in South Africa four years ago but seemingly more fluid and united under the charismatic Van Gaal.

Robben has been inspirational and Robin van Persie's contender for goal of the World Cup so far - that athletic lofted header in the 5-1 thrashing of deposed champions Spain - will have whetted Dutch appetites for the rest of the campaign as well as those at Old Trafford for next season.

Events in Brazil so far, the shame of Suarez apart, have provided a thrilling spectacle. As anticipation increases for a round of 16 that is laced with quality games, the best may yet be to come.

You can map out each team's route to the final on our World Cup schedule page.