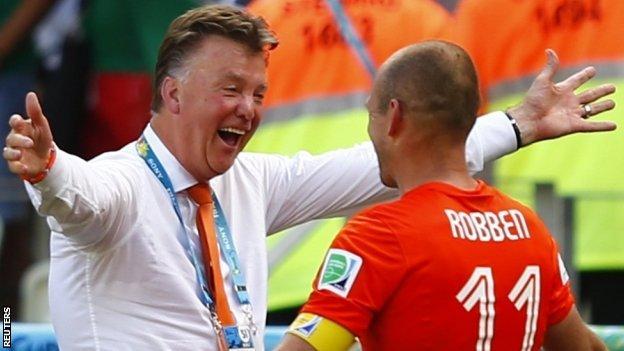 New manager Louis van Gaal will be on Manchester United's summer tour even if the Netherlands reach the World Cup final.

The Reds head to the United States on 18 July for a five-match tour.

However, Van Gaal, 62, could still be in Brazil until 13 July if the Netherlands go all the way.

Assistant Ryan Giggs will take training until Van Gaal returns, but the Dutchman has assured club officials he will be on the flight to Los Angeles.

The Netherlands booked a quarter-final meeting with Costa Rica by beating Mexico on Sunday.

If they overcome the surprise team of the tournament in Salvador on Saturday, it would ensure the Netherlands' involvement continued until at least 12 July given losing semi-finalists must compete in the third-place play-off.

United's non-World Cup players are due to report back for training on Friday, although the first couple of days are taken up with medical tests.

Even if the Dutch lose to Costa Rica, Van Gaal is unlikely to be at the club's Carrington training complex on Monday, leaving Giggs in charge, as he was for the final four games of last season following the dismissal of David Moyes.

Van Gaal has already had an impact at his new club, sanctioning the combined £56m purchase of Ander Herrera and Luke Shaw, in addition to new contracts for Patrice Evra and Antonio Valencia.