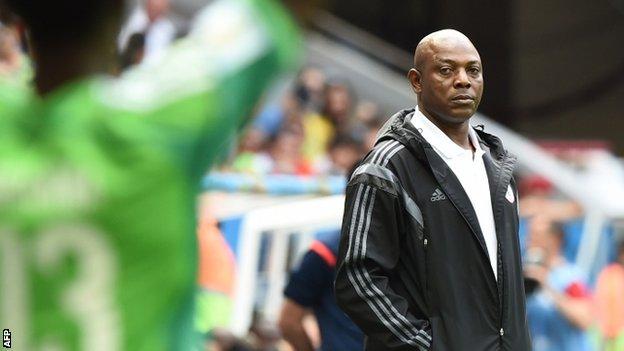 Nigeria coach Stephen Keshi has stepped down from his position after the Super Eagles' exit from the World Cup in Brazil.

France scored twice in the last 11 minutes in Brasilia on Monday to reach the quarter-finals at their expense.

The 52-year-old was appointed Nigeria boss in 2011 and helped them become African champions two years later.

Keshi offered his resignation after last year's Africa Cup Of Nations triumph, citing a lack of support and respect, although he was persuaded to stay by Nigeria's sport minister.

A group stage win against Bosnia-Hercegovina helped Nigeria reach the knockout stages of the World Cup for the first time since 1998, despite the players being involved in a row over bonuses.

The achievement also made Keshi the first African coach to lead the Super Eagles past the group stage.

Keshi, who captained Nigeria at the 1994 World Cup finals, was previously in charge of Mali and Togo.

Yobo told BBC Sport it was a sad but glorious end to his own international career as Nigeria failed to make their first ever quarter-finals.

"This is it. I can look back on my career with great pride," he said.

"It's time to give a chance to other people to come through. Our football has a bright future and I am confident this team can achieve success sooner rather than later."

Yobo is his country's most capped player with 100 appearances and will continue to play club football.

"I wanted to leave on a high for my country. Defeat by France was not the right way to go but I'm happy with all I've done for the national team," he added.