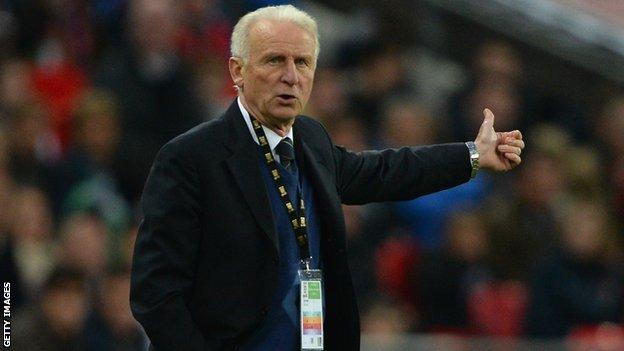 Italian Giovanni Trapattoni has revealed he is in discussion with Ivory Coast to become their next manager.

The 75-year-old has been out of a job since parting company with the Republic of Ireland in September 2013.

"The Ivory Coast? Everything should materialise in 15 days' time," he told Italian radio station Radio Due.

"I could also have accepted taking charge of Morocco and I thought about it for 48 hours, but in the end I made my decision."

The Elephants are looking for a new manager after deciding not to renew the contract of French coach Sabri Lamouchi, who failed to guide the side past the group stages at the World Cup in Brazil.

The Ivory Coast beat Japan 2-1 in their opening game in Brazil but lost against Colombia and Greece to bow out of the competition in the first round.

Trapattoni has been at the helm of AC Milan, Juventus, Inter Milan, Cagliari and Fiorentina in Serie A during his 40-year coaching career.

The former Italy boss is one of only five coaches to have won the league title in at least four different countries - Italy, Germany, Portugal, and Austria.