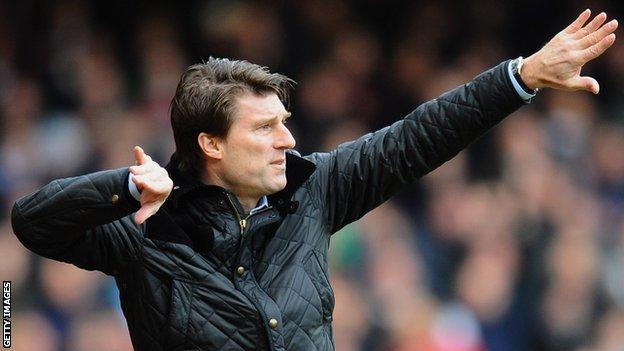 The Dane, who was sacked by Swansea in February, succeeds Belgian Eric Gerets at the Doha-based club.

But Laudrup, 50, says his future beyond his new role is uncertain.

"I'm now entering my final phase as a coach. Although whether Lekhwiya will be my final or penultimate club I can't say," he told Danish newspaper Politiken.

"And I don't know either whether this phase will last two, three or four years. The answer is blowing in the wind."

Laudrup, who also has managerial experience at Danish club Brondby, Getafe in Spain, Spartak Moscow and Real Mallorca, succeeded current Liverpool manager Brendan Rodgers in south Wales in June 2012 and went on to lead the Swans to their first major trophy when they won the 2013 League Cup.

That success won them a place in last season's Europa League, a campaign that produced a memorable 3-0 victory away at Spanish top-flight side Valencia in September.

But Swansea's Premier League form faltered as the season unfolded and Laudrup was sacked after the 2-0 league defeat at West Ham on 1 February, a sixth defeat in eight league games which left the club two points above the relegation zone.

Garry Monk took over after Laudrup's departure, while the Dane said he was sacked by email and claimed he had been told his job was safe after shaking hands with chairman Huw Jenkins.

Former Real Madrid, Barcelona and Denmark star Laudrup reached an agreement with the Swans over his sacking in May, 2014.