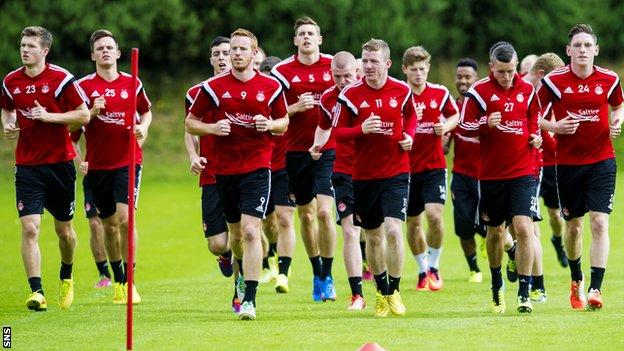 Derek McInnes says the early start to the season will not be an issue when Aberdeen face Daugava Riga in the Europa League.

The Latvians are 19 games into their domestic campaign while the Dons have been back training for three weeks ahead of Thursday's clash.

"People have commented that we're back early and maybe seen it as a negative," said McInnes.

"But, for us it's something we're all looking forward to."

The Pittodrie side finished third in last season's Scottish Premiership to secure European football for the first time since 2009, when Mark McGhee led the Dons to an 8-1 aggregate defeat to Sigma Olomouc.

"I think there's a real enthusiasm, the game's been eagerly anticipated," said McInnes. "As a city and a club we've been without European football the last wee while and I think we've all got to be excited by that - the players, staff and support.

"I think from the player's point of view sometimes pre-season games, after three or four friendly games you're looking for that first game proper and that's where we are at the minute.

"We feel well versed on them [Daugava Riga] and confident there'll not be too many surprises from them. We're familiar with the shape they like to play - it's a shape that not too many teams in Scotland have played over the years, but it's a shape they look comfortable in.

"It'll be our own performance that will decide if we get through or not. We've got to concentrate and hopefully bring the performance we're capable of. I think if we do that we'll cause this team problems.

"Being at home obviously we'll have a healthy crowd in. I always think being at home we've got to utilise that crowd and the players enjoy playing at home.

"We know the importance of getting a positive result regardless of the score on Thursday there's still work to be done over there next week as well."

Midfielder Ryan Jack will make his European debut for his hometown club, with a potential game against Dutch side FC Groningen awaiting the winners of the tie.

"There's a real excitement about the squad we're all looking forward to playing in Europe," said the 22-year-old.

"The match fitness is fine. We've had three friendly matches, we've had a few weeks under our belts training. We're all ready to go for Thursday.

"It's going to be tough but it's a challenge we're looking forward to and seeing where it can take us. We're just going to take one game at a time but you never know where it could end up taking us, we're just going to concentrate on this match on Thursday first."