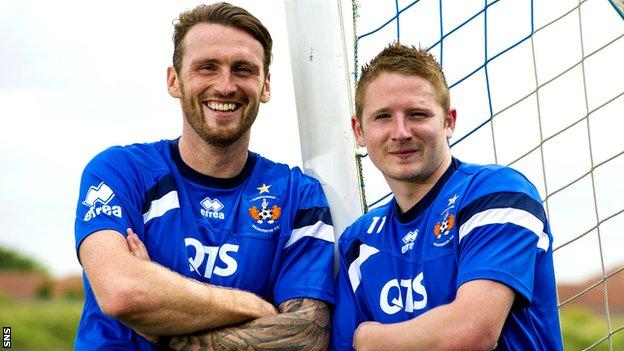 Kilmarnock have announced that striker Lee Miller has signed a two-year deal with the club.

The former Scotland international, 31, was a free agent after being released by English side Carlisle United after their relegation to League Two.

Miller previously had spells in Scotland with Falkirk, Hearts, Dundee United and Aberdeen.

His signing comes on the same day that midfielder Sammy Clingan, 30, penned a two-year contract extension.

Miller, who won three Scotland caps between 2006 and 2009, earned a move to Bristol City in 2003 after breaking through at Falkirk, before spending six months on loan at Hearts.

Buzzing 2 have joined @OfficialKillie .start of an new chapter,bk in the Scottish game,cant wait 2 get started!!

Dundee United paid over £200,000 to sign him in 2005 before he moved to Aberdeen a year later and made over 100 appearances for the Dons, convincing Gordon Strachan to pay around £600,000 to take the striker to Middlesbrough in 2010.

Clingan has extended his contract after making 33 appearances following his move to Rugby Park in January last year.

Both signings come a day after ex-Hibernian midfielder Paul Cairney joined the club.