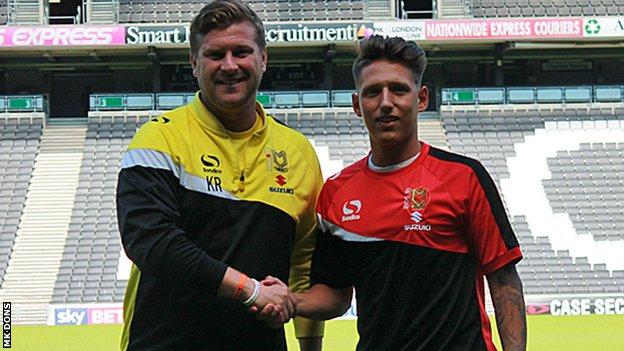 MK Dons have signed striker Tom Hitchcock on a three-year deal following his release by QPR.

The 21-year-old netted five times in 11 games during a loan spell at League One play-off winners Rotherham last season, including a hat-trick after coming off the bench in a 4-3 win over Gillingham.

He also had a stint at Crewe and scored three goals in six appearances.

"Tom is somebody who I spoke to over the summer and he intrigued me," said MK boss Karl Robinson.

"There are a number of strikers that we have looked at, but the thing about Tom is, he's a natural goalscorer and the types of goals he scores are unique.

"He fits into the mould of player we're trying to sign - he's hungry, he's enthusiastic and he's a very talented individual."

Hitchcock started his career at Blackburn and is the son of former Chelsea and Watford keeper Kevin Hitchcock.

He joined QPR in 2012, scoring once in two substitute appearances, and also went out on loan to Bristol Rovers in the 2012-13 campaign.

"I'm buzzing and I can't wait to get started. It's exciting times for me," he said. "There were a few clubs interested but as soon as I knew MK Dons were in for me there was no other choice.

"I've played against them before and the football the team play is really attractive and will suit me will."