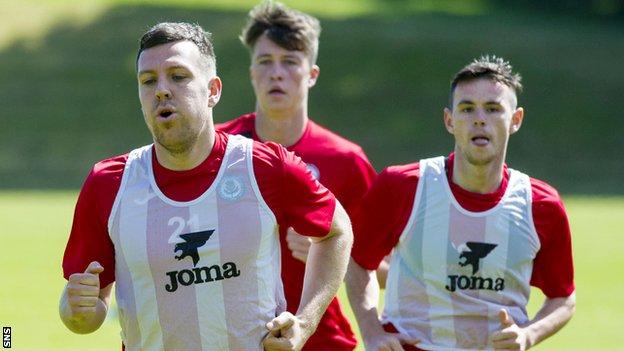 Defenders Carl Magnay and Darren Barr are both training with Partick Thistle as manager Alan Archibald looks to bolster his squad.

Magnay is on trial while Barr has been offered training facilities.

Archibald has been frustrated with the lack of signings after failing to secure Sheffield United striker Lyle Taylor, who has joined Scunthorpe.

"Our recruitment work could be better," he said. "We've only got Ryan Stevenson in so far after missing out on Lyle."

Magnay was released by Gateshead after two years with his hometown club, while Barr was not offered a new deal by Kilmarnock.

Taylor spent last season on loan at Firhill but opted to sign a permanent deal with English League One side Scunthorpe.

"That was a sore one as we thought we had him but because of a last-minute deal we never got him," said the Thistle manager.

"But we have plenty other targets. We just need to make sure they are the right fit, so we won't be hasty."

Archibald is hopeful the club's new training base at the University of Glasgow sports facility at Garscube will help attract more players.

Thistle will now have access to a range of grass and artificial grass pitches, as well as gym and catering facilities.

"It was a bit of a brass neck being a Premiership club and not having anywhere to go," he said. "I just used to sidestep the issue when I was talking to potential signings and not mention the training facilities.

"It was something we had to sort. I was jumping in cars to get to some pitch somewhere 15 years ago, so it was about time it changed. The players were always great and never complained but we had to move the club on.

"It's fantastic for the players and will hopefully help us entice players to the club as well."