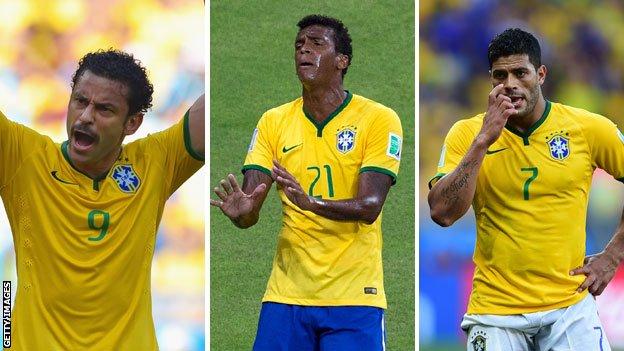 Monday must surely have been a great day for Brazilian cardiologists.

After the scare of the previous Saturday's second-round tie against Chile, when Brazil scraped through on penalties, the entire country felt like having a check-up.

"How much did you suffer?" was a frequent Monday morning greeting.

For Brazil's legion of admirers all around the world, one of the dominant emotions was probably disappointment. Win, lose or draw, people always expect more from the five times world champions.

They want to feel like the Argentine coach Angel Cappa, who was in Spain for the 1982 World Cup, and gleefully recalls that when he was watching Brazil "the ball arrived in one part of the field and disappeared to reappear again in the form of a rabbit and then a dove, and then hide again as the opponents rushed about trying to find it, all of us in the stadium looked at our watches with the intention of making time stand still because we wanted the game to go on for ever".

The 2014 model Brazil may battle their way through the rounds and go on to win the World Cup but they will surely not be remembered all around the world with the same affection of their predecessors from 1982, who did not even reach the semi-finals. Why not?

A change of style

At the end of 2011, after his Barcelona side had demolished Santos of Brazil in the final of the World Club Cup, Pep Guardiola stuck in the stiletto. His team, he said, had moved the ball the way his grandfathers told him that Brazil used to.

The second-round exit of the 1982 Brazil team, which featured the likes of Socrates, Zico, Eder and Falcao, is part of the explanation for a switch in emphasis.

But there is more to it - and it is lazy thinking to conclude that the exodus of players across the Atlantic has 'Europeanised' the team. There is a Brazilian dynamic here.

Brazil's star of the 1950 World Cup, and idol of the young Pele, Zizinho wrote his autobiography in the mid-1980s.

His final words were a warning. "In Brazil," he wrote, "we have given the central midfielder, who has 70% of the team's possession in his power, the specific function of destroying, when it should be to create the moves."

In part this was a response to increasing lack of job security for the coaches. Fear of losing led to safety-first football.

But also it was guided by a perceived importance of the physical development of the game.

More athletic players meant less space on the field, which in turn, it was thought, undermined the possibilities of a possession-based game. The way forward was to take advantage of counter-attacks and set pieces.

Dorival Junior, the coach who schooled Neymar at Santos, argues that Brazilian football has largely forgotten how to pass the ball through the middle of the field, such has been the obsession with quick breaks down the flanks.

They may have won two World Cups since 1982, but unlike then, Brazil no longer seek to beat opponents on flow; they now look to win on moments.

Who is going to provide those moments?

It is one thing to win that way in 2002, when Luiz Felipe Scolari could select Ronaldo, Rivaldo and the young Ronaldinho. But who does he have this time?

The dependence on Neymar is clear. The rest seem to have been relegated to supporting cast.

And this was the least controversial Brazilian World Cup squad selection that anyone could remember.

Brazil's path to the quarter-finals

In attack, at least, there were no major absentees. Kaka, who has since been allowed to leave on a free transfer by AC Milan, and Lucas Moura of Paris St-Germain were given opportunities and found wanting.

Only those who have not followed the decline of Ronaldinho, now at Atletico Mineiro, could imagine that he might be able to influence the course of 2014 World Cup matches.

At centre forward the likes of domestic-based duo Leandro Damiao and Alexandre Pato, who was expected to be a superstar a few years ago, fell victim to injuries and loss of form.

As surprising as it might seem to many, Fred and Jo, top scorers last year in the Confederations Cup and Copa Libertadores respectively, are probably as good as it gets at the moment.

Could current resources be handled better?

"There is no midfield," wrote 1970 great Tostao after the Chile game, "because, as well as lacking an exceptional playmaker, Luiz Gustavo [suspended against Colombia] stays close to the centre-backs, Neymar stays close to Fred and Oscar and Hulk are thrown wide. Fernandinho, or whoever plays there, is left isolated, like Robinson Crusoe, looking upwards, watching the ball as it sails over him."

Andre Kfouri, one of the best local columnists, re-enforces the point about the lack of midfield, writing: "The sector whose task is to harmonise a team does the opposite with Brazil; it divides the side into two units which speak different languages and find themselves obliged to communicate without the presence of an interpreter."

In last year's Confederations Cup - which Brazil won - there was more of a link - but that was before Neymar played more centrally and Oscar was sent out wide, in a bid to open up the pitch and create more space for Brazil's star man.

Previously Oscar's starting point was in the middle, while Neymar played high on the left. Brazil's best moments often came when the two of them were close enough to combine - or when Neymar cut in on the diagonal and exchanged passes with Fred, who may lack mobility but can be effective as the back-to-goal pivot.

These little partnerships - fundamental to any good team - seem to have been lost this year.

Of course, it is probably a little fatuous to compare the Confederations Cup with the World Cup.

The importance of this event is incalculably greater, and so, too, is the pressure. After being told by their coaching staff on 26 May that they already had one hand on the World Cup, Brazil's players have not found it easy to make the emotional adjustment when confronted with unexpected difficulties.

Their sports psychologist Regina Brandao has been brought into the camp.

She has worked extensively with the players and may be able to make a late contribution. All the same, it is a pity she does not play in central midfield.