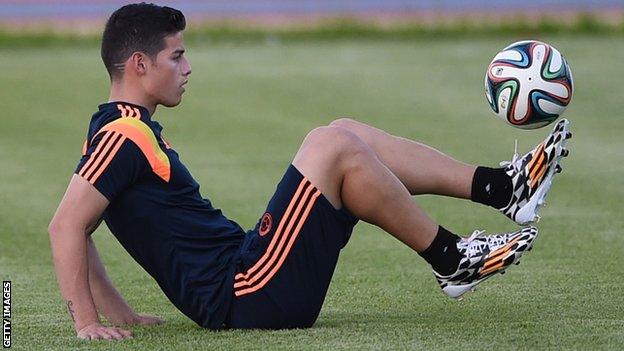 World Cup widows and widowers, prepare to lose your loved ones again - this promises to be a blockbuster Friday.

After two rest days, it is day 23 and we have three football behemoths and an exciting line-up in Rio and Fortaleza for the first two quarter-finals of what has been a fabulous tournament.

Brazil 2014 has already delivered more than it promised - 154 goals, thrilling comebacks, superb strikes, questionable defending and has even had Rihanna gripped.

Mark Lawrenson: "This is the tie of the round. I expect this encounter to be very competitive as well, because they are both well matched.

"Although some of Germany's games at this tournament have been close, they have been the better team in every game they have played."

Lawrenson: "The pressure is off Brazil a little bit because they so nearly went out, and that should have given a lot of their fans with high expectations a bit of a reality check.

"I look at Colombia and think, against a tougher team and under a lot more pressure, will their top players still be as good? I am not so sure, which is why I am backing Brazil to win." 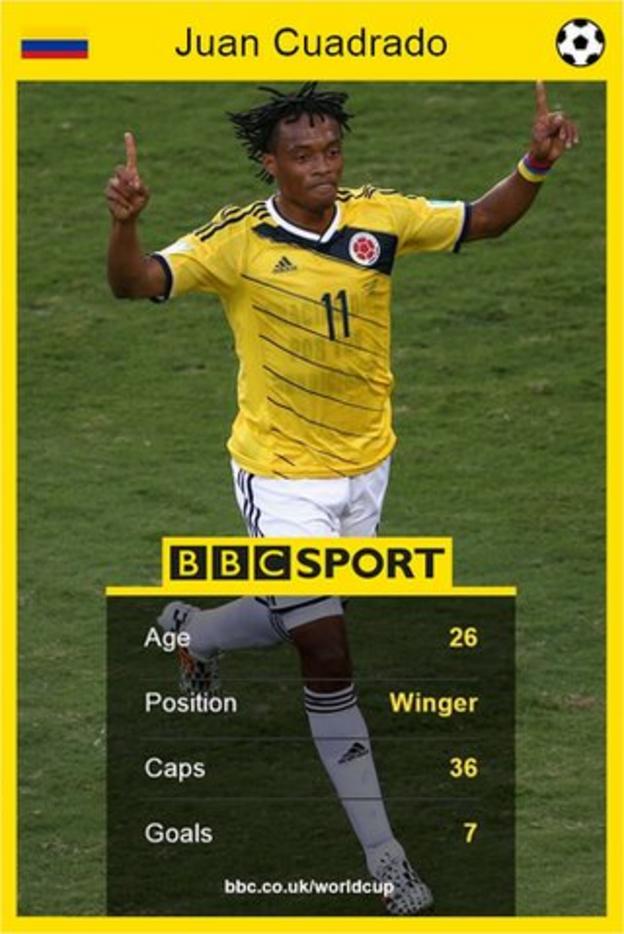 While James Rodriguez is deservedly talked about as Colombia's star attraction having scored five times at the tournament, including the wonder goal against Uruguay, the displays of this Fiorentina winger have not gone unnoticed.

The 26-year-old has been the provider for the team, becoming the first player to reach four assists in one World Cup since Italy's Francesco Totti and Argentina's Juan Riquelme (also four) in 2006.

He also scored in 4-1 win against Japan, before his team overcame Uruguay 2-0 to book a clash against South American hosts Brazil.

Cuadrado predominantly plays on the right-hand side of the pitch - having hogged that wing during the opening 3-0 victory over Greece. During that match he made 11 runs or deliveries into the final third.

In the last-16 encounter, he was asked to cover a lot more of the midfield hence the sparse colouring on Fifa's heat map. What is clear from the statistics is that his ball retention numbers are impressive - having been dispossessed only once from seven occasions.

Pacy, tricky and a tough competitor - Brazil have been warned.

"He's a player with great physical conditioning who achieved great things with his club, just as he has done with his country, and he is ready to go to a great club, regardless of how well he does at the World Cup."

"We will do everything possible to keep hold of Cuadrado. I must admit, Cuadrado's performances and visibility in the World Cup are not helping."

"Qui peut arrêter Karim Benzema?" is what they are asking in France.

So how do you stop him? Well the Germany defence will do their best, but they face a Real Madrid striker who has been rejuvenated under club coach Carlo Ancelotti and is leading the line brilliantly for France.

He has scored three goals so far, but could have had more, having seen one shot roll across the line (before it was nudged in), a penalty missed and a spectacular strike ruled out by a referee who blew for full time.

France coach Didier Deschamps tried Benzema out on the wing against Nigeria, which did not work, until he reverted back to his centre-forward role. It it unlikely Deschamps will try that again.

Unlike Olivier Giroud, who plays further up the pitch, Benzema likes to loiter deep to collect the ball as displayed on the Fifa heat map for the 5-2 win over Switzerland.

He will be France's outlet for the quick counter - and Germany might have to use Sami Khedira to "put the block in".

The 27-year-old club-mate of Benzema, is the dream hi-octane midfielder - plenty of energy, combative and useful in attack.

He has been used sparingly by national coach Joachim Low at this tournament, having only returned to action following injury late in the La Liga season.

Germany looked less fragile in the middle of the pitch when he came on in the 70th minute against Algeria. Low will need his best players for the biggest occasions - Khedira fits the bill.

There have been 17 goals scored in the three previous World Cup meetings between France and Germany, an average 5.7 goals per game.

Germany have reached the semi-finals of the last three World Cups. No nation has ever made the last four in four successive tournaments.

All 10 of France's goals during this World Cup have come from inside the box.

Germany are unbeaten in 15 internationals (W10 D5), longer than any other side still involved at the World Cup.

This will be the first World Cup meeting between the two South American sides.

The last four games between Brazil and Colombia have ended in draws, with three of those finishing goalless.

In their 2012 match in New York which ended 1-1, Cuadrado opened the scoring just before half-time, with Neymar equalising in the second half.

Colombia last beat Brazil at the Copa America in 1991, losing seven and drawing five since that encounter.

No other World Cup tale would befit this section today as well as the France v West Germany 1982 semi-final - to be more specific, the Battiston v Schumacher incident.

It was one of those moments in World Cup history that provoked both shock and anger among those watching, partly because of German keeper Harald Schumacher's actions but also because Dutch referee Charles Corver did not penalise the player.

It happened in the second half. Substitute defender Patrick Battiston raced on to a lofted pass, poked the ball past the onrushing keeper who jumped in the air and crashed into the Frenchman.

Battiston lay on the ground for about two minutes until he was brought off on a stretcher. The player suffered a damaged vertebrae and lost teeth in the incident.

"I have forgiven [him]," he said during the 20th anniversary. "But I don't want to speak about it in these circumstances.

"I do not particularly want to meet him. Over time, I realise that people have forever marked him with this. But now it's finished."

It is hot in Fortaleza - very hot.

The city in the north-east corner hit north of 32C for the match between Netherlands and Mexico. It should be a tad bit cooler by the time Brazil v Colombia kicks off at 17:00 local time.

So in a city with tropical heat, would it not be a treat to visit a park rich in fauna and flora? Presenting Coco Park.

Birds, mammals, lizards and fish inhabit the urban destination and the park is divided into sections to keep those interested in sport or just lazing about, happy.

You can also take a boat trip along the Rio Coco to help with the wildlife spotting.