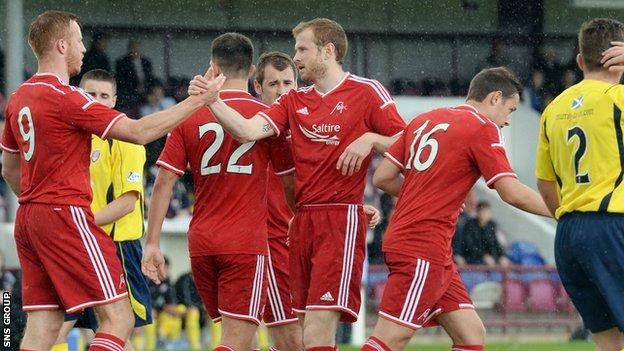 The reward for Aberdeen has been a bout of reorganisation. Their Premiership campaign last term delivered European football, but upheaval to their routine was part of the package.

There will have seemed little continental allure to the players when they were obliged to return for pre-season training early. Wider attention is focused, too, on the World Cup rather than preparations for a Europa League qualifying tie against FK Daugava Riga of Latvia.

Even so, the competition is integral to Aberdeen's ambitions. It was merely an inconvenience that the concession of a stoppage-time goal against Motherwell in the final game of last season consigned the club to third place in the Premiership and an earlier qualifying tie.

Pre-season training and games could be brought forward simply enough. The challenge will be to ensure that players' fitness is not affected adversely later in the campaign, and that competitive instincts are sharp enough for the first assignment of this season.

Continental competition no longer provides the same opportunities for clubs from provincial European countries to thrive in the way that Aberdeen did in winning the Cup-Winners' Cup in 1983. It still offers self-esteem, though, and a chance to underline the notion that progress is being made.

It was a factor of Aberdeen's season that the work of Derek McInnes emphasised a club that was resurgent. The manager was careful to insist that it was not a significant setback that Kris Boyd decided to return to Rangers rather than explore further the option of a move to Pittodrie, even if signing him would have been a signal of intent.

The recruitment of an established and prolific striker such as Boyd would have enhanced Aberdeen but the striker was always likely to follow his emotions if the club he grew up supporting sought his services again.

McInnes made shrewd signings last season, but the challenge now is to continue the upgrade and the manager will continue the search for another forward.

The Latvians are expected to field five defenders at Pittodrie on Thursday and McInnes has been urging his players, and by extension the home support, to be patient.

Aberdeen ought to be stronger and more capable than their opponents, although Daugava will have the benefit of being 19 games into their season already. But, if the Dons are to reassert themselves then there can be no room for mishaps.

McInnes has been an authoritative figure since he took charge last year, and there is a need now to maintain that air.

Celtic are expected to retain the Premiership title, but there is still an opportunity to occasionally disrupt their dominance. Winning the League Cup last season returned some glory to Aberdeen, but was also a reminder that ambition can be nurtured.

Motherwell overtook McInnes's team at the last but, in terms of resources and potential, Aberdeen ought to now be able to establish themselves as the second force in the Premiership. Succeeding in Europe will improve self-belief, but also encourage the club in its efforts.

Daugava Riga are a limited team, and have spent much of this season at the bottom of the league. Even now, they have not broken into the top half of the table and they were beaten 5-1 by Skonto Riga last Wednesday.

They did manage to defeat BFC Daugavpils 1-0 on Sunday, but they will not arrive in Scotland buoyed by their form or status. The tie is an opportunity for Aberdeen to maintain their momentum from the last campaign.

McInnes has never been overawed by the history that surrounds him at Pittodrie. The club has often looked in need of reviving, but he has not shirked from that responsibility.

He has delivered the League Cup and a return to European competition for the first time in four years. The last assignment was a calamitous meeting with Sigma Olomouc, which ended 8-1 on aggregate.

That result is still haunting. Aberdeen are a different prospect now but if the sense of a club on the rise is to be maintained, this season needs to bring improvement again.