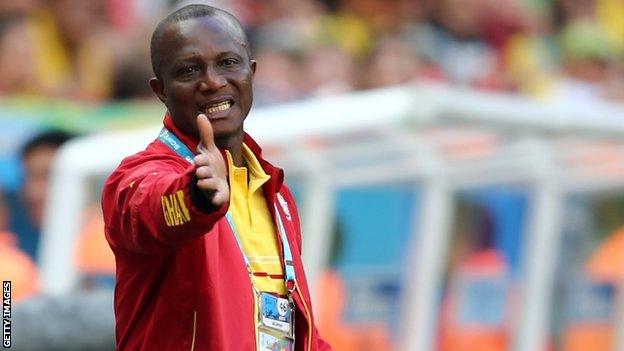 Ghana will have contracts with players at future international tournaments to avoid the problems encountered at the 2014 World Cup over bonus payments.

The players took strike action because they had not been paid prior to Brazil 2014, resulting in $3m (£1.74m) in cash flown out to appease the squad.

The country's football association said it would revert to "signed agreements" and bank transfers for bonuses.

Ghana failed to qualify from the group stage in Brazil.

Meanwhile, coach Kwesi Appiah has revealed he is to introduce a tougher code of conduct for the national team's players following events at this year's tournament.

Appiah sent Sulley Muntari and Kevin-Prince Boateng home early from the tournament in Brazil for physical and verbal assaults respectively.

He said: "Players who come in will be made to sign contracts to forestall any problems like those [in Brazil].

"The contracts will spell out clearly camp rules and all other conditions."

Muntari and Boateng were suspended indefinitely for their behaviour and told to leave the camp before Ghana's last group match against Portugal, which ended in a 2-1 defeat and elimination from the tournament.

Appiah, who has been backed by the Ghana Football Association (GFA) and is set for a contract extension, added: "As we look ahead, I will look for committed players and we will try not to tolerate indiscipline and anyone who will bring our efforts down."

He also wants to implement a plan to learn more about local players before they are brought into the Black Stars set-up.

"I am looking to add up to my technical staff," he said. "We will communicate with local coaches to help provide much information on players.

"I am waiting for the local league to start and I will keep an eye on the players abroad."

As well as the defeat by Portugal, Ghana lost 2-1 to the United States and drew 2-2 with Germany.