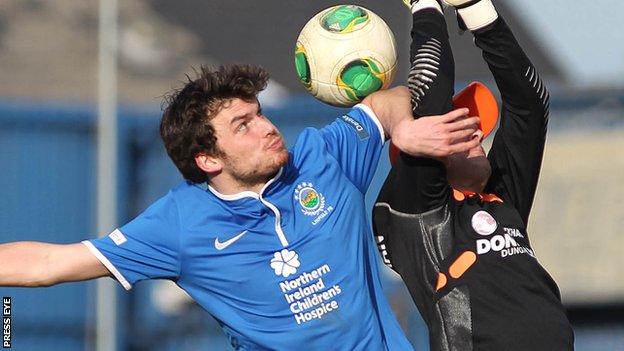 Derry hope Philip Lowry's international clearance will come through in time for the Europa League first-round qualifier against Welsh side Aberystwyth Town.

The former Linfield midfielder could make his Candystripes debut in the first-leg clash at the Brandywell.

He said: "He's a strong, big boy, holds the ball up well and knows where the goal is - he is a very good striker."

Hutton is happy with his team's progress since taking over as manager from Roddy Collins in May.

"I'm pleased with the application of the players. When we came in the fitness levels were well down on what we would expect," added the former City skipper.

"The intensity of the training has gone up and that has been replicated on the pitch.

"The players are fighting for their places and that has to be done not just in a match but during training."

Hutton says it will be "tough" for his side against Aberystwyth.

He added: "A victory is vital, something we can take into the second leg in Wales."

Aberystwyth manager Ian Hughes has no injury concerns, with new signings Steffan Williams and Chris Davies are set to make their debuts.

Wales Under-19 defender defender Thomas Atyeo, on loan from Swansea City, is also included in the squad.

Aberystwyth qualified for the Europa League qualifiers as runners-up in the Welsh Cup, losing 3-2 to Welsh Premier League champions The New Saints in the final.

The Seasiders will be making their first appearance in the Europa League, though they previously appeared twice in the now defunct Intertoto Cup.

Their preparations for the Europa League campaign have included friendly wins over Porthmadog and Bangor City and defeat against The New Saints.

"We'll be very meticulous in the way we do things and the players will know as much as they can know about the players they're coming up against," Hughes said.

"I'd like to think my players will be able to stand up to the test because they've done that in the past whenever we've asked them."