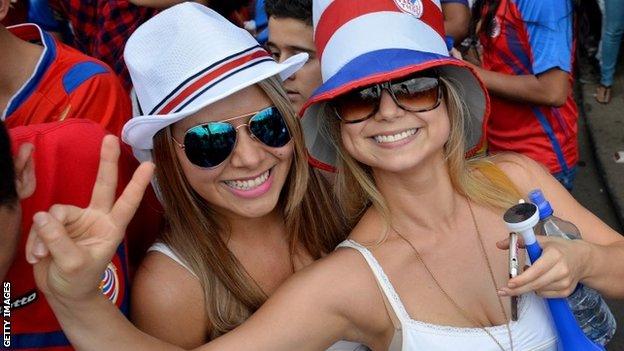 Are we set for another shock at the 2014 Fifa World Cup?

It is day 24, the day on which the final four will be completed. Can Costa Rica extend one of the great World Cup stories and reach the semi-finals? Can Lionel Messi continue his quest to replicate the feats of Diego Maradona and lift the trophy for Argentina?

Mark Lawrenson: "The pressure on Lionel Messi to perform has been massive. So far he has delivered and Argentina will undoubtedly have the best player on the pitch on Friday.

"But I think Belgium have got the best team and they will have too much for Argentina in all areas."

Lawrenson: "This is when we find out how much the Netherlands' gruelling win over Mexico in the last 16 took out of their players.

"Organisation, fitness and athleticism are all strengths of this Costa Rica side but I still think the Dutch have more quality, and that will take them into the last four."

He is 22, helped Feyenoord finish last season as runners-up in the Dutch league and is now one step away from playing in the World Cup semi-finals. 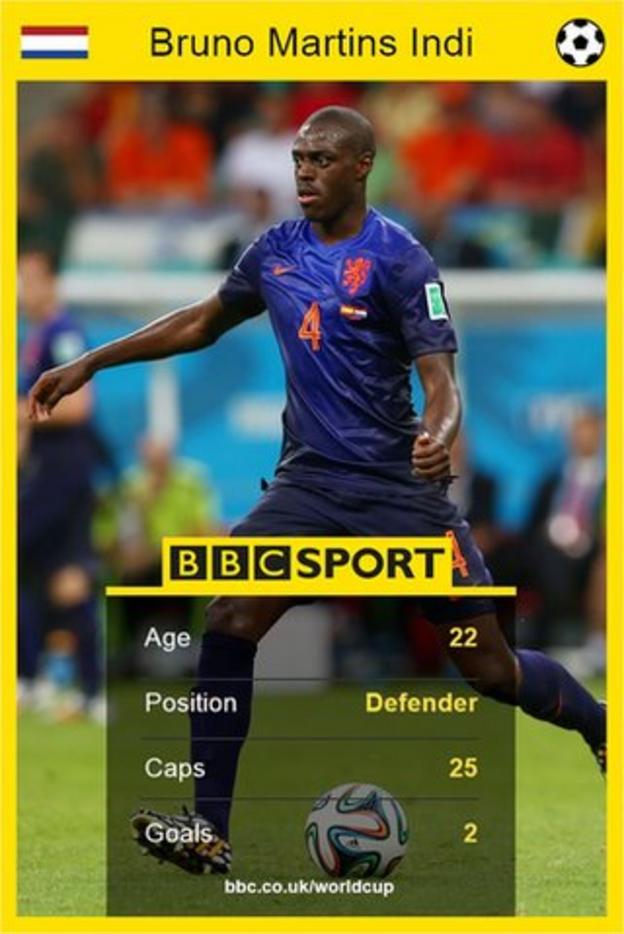 The left-sided defender was part of a three-man backline given the task of blunting Spain's tiki-taka in the opening game - regarded as Netherlands' toughest match in the group phase.

The Dutch won 5-1, and Martins Indi dominated Diego Costa, though perhaps he did not expect the Brazil-born frontman's frustrations to result in an apparent headbutt, unnoticed by the referee.

Martins Indi mainly occupied an area about 40 yards from his own goal. Because of Spain's constant movement he covered 10,228m - with 9,355m the Netherlands average.

He is athletic, strong, seemingly fearless and has also given further evidence to those who believe there is always in-fighting when the Dutch attend major championships.

"Arjen is a good dribbler. I thought he fell needlessly once," Martins Indi said. "We had a little head-to-head."

Having fully recovered from the concussion he suffered against Australia, he has a great opportunity to underline his status as one of the world's brightest defensive prospects.

"Sometimes you can't stand in the way of a player who needs a bigger stage to develop into a world-class player."

How many Belgium players will be handed the honour of marking Lionel Messi?

Coach Marc Wilmots, who played at three World Cups, said: "We won't only be watching Messi." He will surely be their main focus, though.

So who will be Messi's shadow? And will the Barcelona attacker be able do what compatriot Diego Maradona did to Belgium in Mexico 28 years ago, scoring twice in a 2-0 win?

It could be left to Manchester United's Marouane Fellaini to upset the Argentine. In the last-16 game against the USA, the 26-year-old chased the likes of Michael Bradley, Clint Dempsey and Fabian Johnson - three players with high work-rates matched by a player who, on his day, can be very effective both in front of defence and in support of the attack.

On Saturday, it could be a case of 'the Tortoise v the Hare'. Messi has by far the greater pace, but if it is 0-0 after 80 minutes, who will have the greater stamina?

Argentina have won three of their four encounters with Belgium, scoring 10 goals and conceding four.

Belgium have reached the quarter-finals of the World Cup for only the second time in their history after 1986. They eventually finished fourth.

Argentina have been victorious in six of their seven World Cup games that have gone to extra time.

Belgium have only been ahead for 52 minutes in their four World Cup games so far in 2014, less than any of the seven other teams in the quarter-finals.

Netherlands have won 10 of their past 11 World Cup matches, the only defeat in that run being by Spain in the 2010 final.

Seven different players have scored for the Netherlands at this World Cup.

Los Ticos became the first Concacaf team since the USA in 2002 to reach the quarter-final phase of the World Cup.

We have touched on it already, but it is only fair this moment of nostalgia is given a good airing.

The year was 1986. Midfield wizard Diego Maradona had just given Argentina a 'helping hand' in seeing off World Cup quarter-final opponents England (also, it must be said, scoring a wonderful goal).

His team now faced a talented Belgium side led by Club Brugge's Jan Ceulemans and featuring the wonderful midfield talents of Enzo Scifo.

Maradona turned on the style again; scoring the first with a clever dink before collecting the ball from 40 yards out, surging away from his markers and adding a glorious second in the 2-0 win at the Azteca Stadium.

"I believe we were defeated by the best player," said Belgium coach Guy Thys. "If you put Maradona in my team, then Belgium would play in the final match."

Brasilia, the host city for Argentina v Belgium, is located in the Brazilian Highlands in the centre of the country.

The city was designed by the late Brazilian architect Oscar Niemeyer and is divided into numbered blocks and sectors, which specialise in certain activities. There are areas for hotel accommodation, banking or foreign embassies, as well as a mansions sector, with large houses belonging to the city's most affluent residents.

Inside the aeroplane-shaped city centre, the architecture is striking and crime rates are relatively low. But the city's inequality is evident in its underdeveloped satellite cities, which are plagued with poverty and crime.